Ever since I fell in love with pinot noirs emanating from Oregon’s Shea Vineyard, I had wanted to hold a Shea tasting, to gather as many wines from as many wineries as we could find and see how they match (and stack) up. 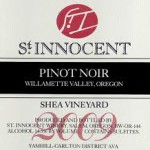 Our mission, as my friend Mike put it, was “to see if we could pull out distinct flavors/aromas of the land. 

Our hope, as my pal Joe framed it, was “to discover the Shea fingerprint or some distinctive genetic traits, like red hair and freckles, that would make Shea unmistakably distinguishable in the glass. 

Our results were “¦ mixed, as so often happens in the wine world. Only one of us found a common thread, the kind of connective tissue that not only brings some delight but also would enable us to be able to recognize a Shea Vineyard wine in the future, event tasted blind.

Joe: “I was able to imagine a vague cousin-like relatedness between the wines, maybe 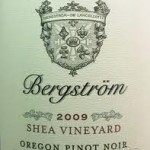 because I wished for it. In the end it was not a display of similarity but much more so, a study of contrasts. “¦ Mostly, for me, it was a display of winemaking styles. The wines ranged from classic more delicate and traditional styles to a head-banger volume of power and deep extraction (Shea Cellars “˜Homer’). 

Larry: “There is no doubt that I am romantically involved with wine. It is not, therefore, inconceivable that I delude myself. I want it to be true that the great vineyards express themselves beyond the machinations of the winemakers.

“Outside of the vineyard owner’s [Shea Cellars] wines, which I found idiosyncratic, I found family resemblances structurally and in the flavurs. These wines were an amazing juxtaposition of elegance and power; actually I’m not sure whether it is power or density. This is the reason I believe that the wines from Shea are approachable young but age so long and so gracefully.

“In the aromas and flavors it is the dramatic yet supple black fruits, especially black plums or cherries, and Asian spices that are expressed somewhere in Shea wines; sometimes forward but almost always in the finish. “¦ I think these wines are from the same palette. 

Mike: “I keep thinking about how much they all tasted/smelled so different from producer to producer. I mean, most winemakers assert that great wine is always made in the vineyard and I think that, while these all were great, there wasn’t a huge thread 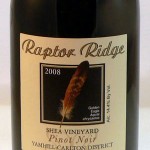 connecting them together (from producer to producer) other than they all were Northern Willamette pinot noir.

“I wanted that saying, that great wine is made in the vineyard, to be true and I wanted to see it in what so many folks have called the greatest pinot noir vineyard in North America. “¦ I smelled and tasted more differences than sameness. I smelled and tasted more influence of winemaker (barrel, extraction, ripeness, acid, aging) than influence from the land and soil. What was more striking to me was, when side by side, the effect of vintage, 2010 being, in most cases, far superior to 2009.

Mark: “I could probably tell you some of the different Turley designations blind because I can compare them and have done so over and over. I was even able to tell a Rutherford Cab from others after trying them once, but I don’t think I could pick out Shea [even after the tasting]. 

Joe: “Looking back on this, it seems contrast should be expected. Shea consists of morethan 30 blocks of vines, including different slopes and different exposures. I would expect even these most basic facts would explain a lot of variation in character. Add to this matrix more than 20 different producers with different points of view.

“If Shea was in Burgundy, it would have been sorted out centuries ago based on distinctive characteristics and winemakers would be committed to display the character of the vineyard. While this may somewhat true at Shea, our tasting suggested there is a long way to go.

“In the end, it was a great excuse to drink a ton of delicious wine with fun people. I’m happy to think many years of serious study may be required to unlock the secrets of 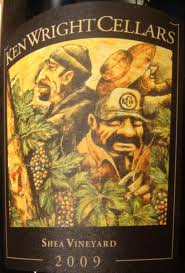 Shea. I’m dedicated to doing more than my fair share of the work. 

Mike: “Maybe it was skewed from the get-go. Maybe, in order to taste the Shea and see the Shea that we need to taste all one clone from all one plot from just one producer over an extended set of vintages but then. … That seems to say that Shea should be broken up into sub-zones (not arguing for or against that here) and that there might not be anything special about the whole thing.

“Or maybe we need to do 6 Shea and 6 non-Shea from the same vintage. Or the whole line-up from 2-3 different producers including their Shea.

Larry: “These things fascinate me, is that the opinions or more accurately my opinion is so different than tasters for whom I have great respect. Early in my career I would hang back at tastings wanting to learn but more importantly not be wrong. After all these years, I’ve learned that truly talented and knowledgeable tasters realize there is no wrong. It is like football fans; you can like any team you want and not be wrong. Except for the Packers, of course. 