Opening a winery is a long play. The expenditures are large, and it’s quite some time before revenues start flowing in. As the saying goes: What’s the best way to make a small fortune with a winery? Start with a large fortune …

But the Haas and Perrin families’ Tablas Creek project would have tested the patience of Job. 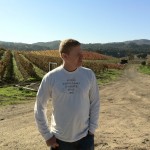 The winery, Jason Haas (left) noted, “was devised for the long run. They knew it all would take 10 years before they got anything. 

That made it a particularly long play for Jason’s dad, Robert Haas, who was 62 when the winery started up in 1989. Twenty-three years later, Tablas Creek is successful and revered, and Robert Haas is “still driving the forklift at the winery,” Jason said. “We can’t keep him off of it. 

The search for just the right spot began well before 1989 for the Perrins, owners of Chateau Beaucastel in the Rhone region.

“They came away from a 1970s California visit baffled as to why people were planting so much cabernet and chardonnay in what was essentially a Mediterranean climate,” said Jason Haas, who is now partner and general manager of the winery. “If you would have asked them in the beginning where they would end up, they would have said Sonoma. 

The Perrins along with Robert Haas, a longtime wine buyer and owner of the company that imported the Perrins’ wines, wanted to plant Rhone grapes and scoured California for just the right locale. They finally found a spot west of Paso Robles and east of a mountain range that cut off cool ocean breezes. 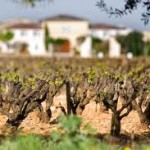 There were other factors in that site’s favor, Haas said: 320 days of sun; a 45-degree difference between day and night temps (“and that cold comes without fog, which is even better”); 25 inches of rain per year, almost twice as much as in the town of Paso Robles a few miles to the east.

“We haven’t turned on irrigation for three years,” Haas said. “You have to go to the western edge of Paso to get enough rain to dry-farm. 

But perhaps the biggest attribute the Perins and Haases sought was limestone, providing the kind of calciferous landscape that is prevalent (5 to 20 feet below the surface) in Chateuaneuf-du-Pape.

So they bought 120 acres and have since slowly expanded. They brought in clones of grapes that thrive in southern France’s Mediterranean climate (syrah, grenache, viognier, rousanne, tannat, etc.) and eventually started making wine. 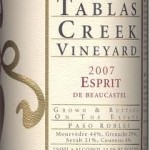 The flagships are the Esprit de Beaucastel blends, rouge ($55) et blanc ($40), and they are deep, layered, profound delights, sensually tightrope-walking the Old and New Worlds. There also are red (grenache-based) and white (viognier-based) versions at the next level down, Cotes de Tablas ($27 and $30).

And on our visit, the new blends called Patelin de Tablas ($20) and the newer varietal wines ($27-$40) were surpassing successes. The Vermentino, Mourvedre, Tannat and Rousanne were firm and focused, true to the grapes and to the soil, what my companion Joe likes to call “honest wines” “” a high compliment for us cork dorks.

Jason Haas, who is the primary writer for perhaps the best winery blog going, said the Haases and Perrins got lucky in one respect when they chose the land, with the site’s natural yeast. *We took a leap of faith at the beginning and have always been able to be native-only,” he said. “It’s sort of a choice you only make once. Once you add [inoculations of yeast], that becomes dominant. 

So the land these families landed on after a long and arduous search turned out to have not only the right soil and climate and exposure, it even had the right aerial funghi floating around. The result?

“The grapes,” Haas said with a proud smile, “really like it here. 