In one sense, Kevin O’Connor and Matt Licklider’s timing was less than fortuitous; in another, it was semi-brilliant. While they launched the LIOCO winery in August 2005, three years before the economy tanked, they also stuck with a terroir-driven, non-interventionist approach that has found great favor in the ensuing years.

Sourcing their grapes only from carefully chosen vineyards in Napa, Sonoma and Mendocino counties, they have hewed closely to the theme “It’s not about the way 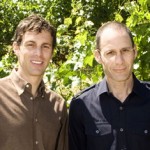 you make wine; it’s about the way you grow wine,” as O’Connor (on the right, with Licklider) put it over lunch last week.

“Our primary focus is to manage grown fruit. No magic happens in the winery,” he said. “We’re managing all the farming ourselves. That’s my function. I talk to our vineyard manager more than our winemaker.”

As if to fortify that argument, O’Connor then received an electronic missive and lamented the pH and brix levels they were getting that day from grapes in a Carneros vineyard. “I’m not sure that’s gonna get there,” he said.

That helps them “pick grapes with good structure,” O’Connor said and staying out of the way in the winery. “We’re not gonna muscle wines into what they need to be.”

The results are stellar, often stunning. LIOCO’s 2010 NoCo (for North Coast) Chardonnay ($18) is the very definition of purity, and as good a chard at that price as you’ll find. I also loved two other 2010 chardonnays ““ the friendly, focused Sonoma County ($23) and the delicious, chiseled, spicy Russian River Valley ($39).

The winery’s most brilliant effort is the 2009 Hirsch Vineyard Pinot Noir, which ““ OK. I’ll go ahead and say it ““ is a serious bargain for those who don’t mind spending $60 on a bottle of wine. Silky and sultry, it boasts fabulous red fruit and superb depth.

LIOCO (an amalgam of the two owners’ names) also has bottlings from beloved vineyards Michaud, Charles Henitz and Hanzell. That’s what fits the good-timing part, the appreciation for these sites coupled with a willingness to let the fruit shine. “People are more savvy to style, more informed about style,” O’Connor said. “The layers of the banana are being peeled off.”

I wrote about Kevin a couple of years ago and became a devotee of LIOCO’s wines at the time. If anything, they’re even better now.