Being a judge in wine competitions does not require a robe — although that would make spillage and errant spitting less egregiously obvious — but it does warrant at least a couple of hats, at least for a journalist.

That’s partly because I’m trying to discover some tasty bottles to recommend, which I did in this blog post at my day job. And I’m aiming to learn how experts (present company not included) assess wines. But mostly, I’m just attempting to do the job I’m assigned: figuring out what wines are medal-worthy. Here’s how that works: 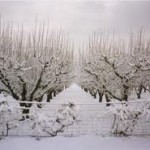 In the International Cold Climate Wine Competition, we were judging juice made from grapes that could withstand the winters in Minnesota, Vermont, northern Ohio, Canada, etc.

There were seven teams with three arbiters apiece, usually from different fields (media, merchants, restaurant folks, winemakers, etc.). I was teamed with a winemaker from Illinois and a local wholesale rep. Our palates differed fairly often, and when they varied wildly, I was usually the outlier, loving something they hated or vice versa.

One factor that took some getting used to was that the winemaker was putting tremendous weight on what’s called tipicity. We were told only what grape(s) were being used and the residual sugar content. He was very familiar with what these varieties tend to taste like, and had a strong notion of what they should taste like.

I was judging more or less in a vacuum, trying to approach the wines as a consumer who happens to be a professional (of sorts). My medal ratings basically work like this: a bronze is a wine I find quaffable; a silver is a wine I feel comfortable recommending, and a gold is a Wine of the Week-caliber offering.

At first, this inter-panel dichotomy was discomfiting, but eventually I decided that it was overall a good thing, at least from the competition’s standpoint. And we actually had a melding of the minds when one of the white wines smelled and tasted exactly like a New Zealand sauvignon blanc, cat-pee elements included. No medal there.

But that brings up another hurdle I face when assessing wines. There are certain styles that I don’t particularly care for: uber-creamy chardonnays, overly oaked malbecs and merlots, and the aforementioned sauv blancs. But I have to set my personal tastes aside, especially in my newspaper job, because a good bit of the audience loves those types of wines. So I feel comfortable in that venue recommending wines that are really good exemplars of that style.

Back to the competition: There’s a 20-point scale, and it’s not broken down the way I would. First off, there’s 2 points for appearance; cloudiness used to be a sign of problems with a wine, but last year I had a Wind Gap Trousseau Gris and Pinot Gris from both Wind Gap and Salinia that were absolutely delicious, so I’m not sure that should be part of the equation.

Then there’s the actual consumption process breakdown: 6 points each for aroma and flavor and 3 for finish. Sorry, but the taste/texture/balance thing is worth more than half the appraisal in any wine experience, and even if you add in this contest’s final 3 points for “overall assessment,” it doesn’t get to the halfway mark.

I absolutely love smelling wines, and crave those almost spiritual experiences where I could simply sniff away and be camped out on Happy Lane. But for me the rubber meets the road on the palate, and the finish is at least as important as the aroma.