I’ve been blessed over the past several weeks to spend a lot of time with my kind of wine people. Simply put, that would be wine lovers who don’t love (or talk) it to death, who bring an abundance of generosity and curiosity to our gatherings, who understand that wine is for sharing, and exploring it in fun ways is an endeavor worth relishing.

These folks are also generous of spirit, have gotten over wanting to be the smartest person in the room (if they ever were that way, which I doubt) and truly wish to know what others think.

One such occasion was a two-nighter, an experiment to test the biodynamic calendar, 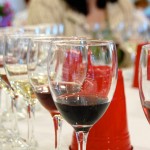 which alternates between optimum and crummy times for drinking. Our host, Larry, had us in the same room sampling the same wines in the same order at the same hour. Not sure if the barometric pressures, which also are said to affect tasting experiences, were closely aligned.

The results, alas, were inconclusive. For most of us, some wines were more expressive and tasty on the first evening, others on the second. Larry was nonplussed, seeming to be more concerned that we had not had a revelatory experience than that his hoped-for results were not achieved.

Later that second evening, after we had devoured about half of Alaska’s crab legs, Larry proposed that we blend a Spanish garnacha and Austrian gruner veltliner to make “rosé.” Now this was a successful procedure, producing a “wine” that might have been better than the sum of its parts. I always forget how much fun this bit of blending can be, even when the results are, in Minnesota parlance, “interesting” or “different.”

We came back to the same locale a week or so later for a thank-you feast. When we arrived, Larry and a co-worker were sampling two sets of wine. I assumed they were different vintages of the same wine, but it turned out that they were the same wines, and one bottle of each had been refrigerated for 2-plus hours and the other plunged in icy water for 20 or 30 minutes. Both the Chablis and Champagne showed better out of the fridge than the bucket, we all agreed.

Later that night, as we were drooling over steaks my friend Joe had brought in from 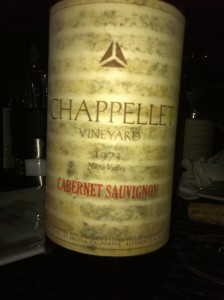 Lobel’s in NYC “” have I mentioned that these people are magnificently magnanimous? “” Joe brought out a bottle of 1974 Chappellet Napa Cab. It was stupendous, showing no sign of old age, every drop worth savoring.

As we were finishing it off, Larry headed inside. When he returned, he bore another bottle from that era: the 1973 Stag’s Leap Wine Cellar Cabernet. Yes, the same wine that won the 1976 Paris tasting, advancing the cause of California wine immeasurably.

I hope I don’t even to mention that this was anything but a my-dick-is-bigger-than-yours deal. Larry ain’t wired that way. He just thought it would be cool to try that wine with another ’73 Napa cab.

Alas, the Stag’s Leap was pretty much spent, pruny but still quaffable. No matter. I got a much bigger buzz out of my two friends’ extraordinary benevolence than any wine could provide.