Some well-said stuff from some gifted wine writers:

“There is no money, among that which I have spent since I began to earn my living, of the 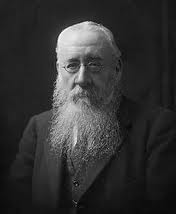 expenditure of which I am less ashamed, or which gave me better value in return, than the price of the liquids chronicled in this booklet.  When they were good, they pleased my senses, cheered my spirits, improved my moral and intellectual powers. — George Saintsbury (left), “Notes on a Cellar Book”

“I remember three constant frequenters of the docks … who used to express themselves in their peculiar oracular way, so authoritatively, that I resolved to put their judgment to the test … I used to tell the cooper to draw two glasses from the same pipe, and to hand them as if they were from different numbers.  I may say that the trick upon them was invariably successful, for they were sure after tasting, and re-tasting, and much profound thought, to pronounce the verdict that, although similar, one possessed rather more of this, or that, than the other.  I kept my own counsel, but was convinced … that in wine-tasting and wine-talk there is an enormous amount of humbug.” — T.G. Shaw, “Wine, The Vine and the Cellar”

“I know never to take a wine for granted. Drawing a cork is like attendance at a concert

or at a play that one knows well, when there is all the uncertainty of no two performances ever being quite the same. That is why the French say, There are no good wines, only good bottles.” — Gerald Asher (left)

“A typical wine writer was once described as someone with a typewriter who was looking for his name in print, a free lunch and a way to write off his wine cellar.  It’s a dated view. Wine writers now use computers.” — Frank Prial, New York Times