I used to wonder what was up with all the hating on zinfandel. Was it the bad puns? The jam-o-rama-and-nothing-else nature of so many of them? Some latent association with white zin?

OK, I’m going with “none of the above” because I have a new theory:

Many of us on this wine journey have a need to feel as though we have moved beyond a certain varietal. But that approach assumes that the journey is a straight line, that once we’ve left Chicago on Route 66, we can never return.

Well, I call shenanigans on that notion. I prefer to circle back to some of the places that I have thoroughly enjoyed along the way. Including, perhaps especially, zin.

I might not alight on the exact same brands. The “three R’s” of yore, erstwhile reliable renditions of this varietal, are down to one for me: Ridge, still delicious, complex and interesting. I have not enjoyed the Ravenswoods I’ve sampled of late, and Rosenblum Cellars sorely misses the guiding hand of its founder, St. Paul native Kent Rosenblum, who sold the winery a few years back. 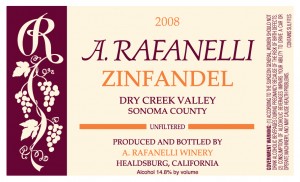 But there are plenty of fascinating and flavorful zinfandels out there. Many of the better ones — earthy A. Rafanelli, ethereal Sky, rich but rustic Brown, bold Outpost, voluptuous Carol Shelton — are not available in Minnesota, but can be ordered online.

But Turley, once rare in these parts, is popping up on retail shelves and restaurant lists with increasing frequency. In this week’s Star Tribune column, I mention several other zins that I find worthy of their price tag, in a variety of styles. Since I wrote that, I have tried another gem in the $13 range, Montoya’s Lodi Zin.

When I started on that column, I was concerned that zin was on the wane. My friend Bill Summerville at La Belle Vie and Sea Change is an avowed disdainer, and my friend Craig Ritacco at Mission American Kitchen is among many local restaurateurs who have reduced their zin offerings.

But then I talked to a few merchants and learned that retail customers still like zin just fine. And I remembered that a coterie of cork dorks with whom I share an occasional bottle has among its regular outings a ribs-and-zin night. And that a local character with an amazing palate and cellar, a man known alternately as “Burgundy Bob” and “Barolo Bob,” holds an annual zinfandel tasting.

And of course, there’s this angle: The wine aficionados who sniff at, rather than sniff and sip, zin are leaving more for the rest of us. As for that whole image thing, maybe this guy will help zinfnadel get a little less disrespect.