Wayne Bailey might not be equal parts Iowa and Oregon, but as a vintner he seems to combine the best of both: the Midwestern work ethic and understanding of farming from his native state and the unflagging ardor for taking care of the Earth of his current home. That’s why he says stuff like this:

• “Anything we humans do, it smacks in the face of nature.”

• “Having grown up in the 1960s chemical revolution, I knew that wasn’t where I 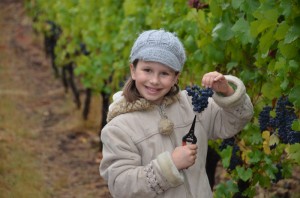 wanted to go. My family lives in the vineyard. When they’re growing grapes here 50 years from now, the vines and the soil are going to be better than I found them.”

Turns out it’s not such a long, strange journey from Oakland, Iowa, to McMinnville, Ore. Especially when one is eager to learn something and to evolve every step along the way.

Oh, there were detours. Bailey quickly pivoted from farming in college to study mechanical engineering. He then worked in “engineering design, sales and marketing, strategic planning on the corporate side; consulting.”

The biggest influence on this path to owning a winery whose credo is that “wine is a wonderful gift from nature”? These sundry jobs “all helped in one way or another,” Bailey said, “but consulting in the food and beverage industry, seeing how restaurants dealt with food and wine from a sales and distribution side” had the most impact. 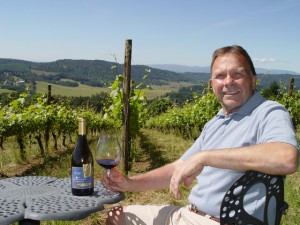 The evolution ticked up several notches once Bailey (left) bought the Youngberg Hill property in 2003. Finding vineyards that had been not-so-scrupulously farmed, he adopted more than a varietal from his favorite French region. “In Burgundy it takes two years to have an evolution away from chemical farming to natural farming,” Bailey said of his first makeover.

Beginning in 2006, he started to move toward biodynamic farming, which was just catching on in Oregon but had a familiar feel to Bailey. “[Biodynamic pioneer Rudolf] Steiner says ‘do this here and this there and this then. I grew up on the Farmer’s Almanac, so I know all that stuff.”

Indeed, the man, like fellow Upper Midwest native Ken Wright (who planted the vines in Youngberg Hills’ Natasha Vineyard 24 years ago), is a bit of a soil nut.

“In our Jordan Vineyard,” he said, “because the earth is shallower and more porous, the vines work harder to get moisture, have to suck it up. Every time they’re sucking that up, they’re also sucking up other good stuff in the soil.”

Another transformation occurred in 2007, Bailey said. “We gave up harvesting based on brix. We look at the fruit and the components, we taste, it’s very subjective. Particularly in our environment, brix tell such a small part of it.”

It’s all part of what Bailey calls “a pragmatic as opposed to proscriptive approach.” 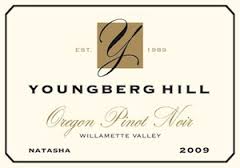 The result: 1,500 cases a year of absolutely delicious wine, juice that reflects both the care given to the growing conditions and the particular year’s climate. The 2009 Youngberg Hill Natasha Pinot Noir is earthy but elegant, nigh onto profound., The same vintage’s Jordan Vineyard Pinot Noir is layered and complex, more minerally with wonderful persistence. Both are serious steals at $35 to $40.

While a farmer at heart, Bailey now allows that “my favorite thing probably is the barrel tasting. I’m not a blender. I’m all about keeping true to the place, to reflect the fruit that’s grown on that hill. It changes, transforms in every barrel individually. The art of winemaking is the miracle of how wine evolves in each barrel. Every barrel is different, every vintage different.

And if anyone would recognize that, it’s this once and future farmer.