We came to Calera to taste some world-class pinot noir and check out the steep, remote vineyards from which it sprang. We departed utterly sated on both counts.

But the revelation was Calera’s other wines: a 1978 Late Harvest Zin, still fresh and ripe and maple-laden, and two fabulous 2010 whites made from grapes that

America needs to see more of, viognier and aligote. The former was a heady delight, rich but refined and packed with floral flavor. The latter, made from Burgundy’s (way-) second white grape, was lithe, lemony and splendidly balanced.

“Josh [Jensen, Calera’s founder and still its driving force] has always liked the more obscure varietals,” said our surpassingly charming host, Marta Rich. “Unfortunately, we do not have a lot of plantable area in Mount Harlan to expand viognier or [other white grapes]. 

Indeed, of the 1,000 acres Calera owns in this appellation about halfway between Hollister, Calif., and East Jesus, only 83 are planted. All the vineyards sit between 2,200 and 2,500 feet elevation in a barren landscape.

“This area doesn’t have water,” said winemaker Mike Warren as he drive us up a jarringly 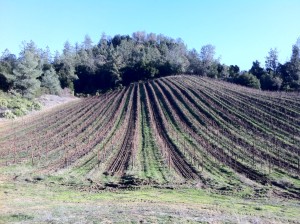 bumpy gravel road with no dwellings within sight. “It doesn’t have the things that keep people alive. We had water in our reservoir this year for first time in five years.”

Jensen worked in Burgundy in the early 1970s and then spent two years scouring the West Coast for soil that resembled that of the CÃ´tes d’Or. “Josh got geological maps of California and Oregon and found this spot,” said Rich, who headed west two days after graduating from Golden Valley (Minn.) High. “He was seeking just the right limestone after his time at DRC and Dujac. 

He certainly found it. More than a quarter-century later, perhaps because Calera remains the only winery with vineyards in the Mount Harlan AVA, its wines are truly distinctive. But as in his beloved Burgundy, Jensen’s pinot noirs from different lots vary mightily.

The 2011 barrel samples prompted these hastily scribbled descriptors: Reed, rough-and-tumble; de Villeurs, light and fruity; Jensen, loaded with fruit and tannins; Selleck, black fruit. A 2010 Reed had rounded into dusty, delicious form, and 1983 and ’95 renditions were pure and balanced, with some five-spice notes on the younger wine and a raisin-y aspect to the ’83.

Great promise and great fulfillment: My kind of tasting, and my kind of winery.