Minnesota is blessed with a lot of syrah weather, so it’s not a challenge to find fun people who like that grape as much as I do.

So a couple of times every winter, several of us gather and turn the Ward house into Chez Syrah/Shiraz, most recently on Saturday night. Here is what it looks like: 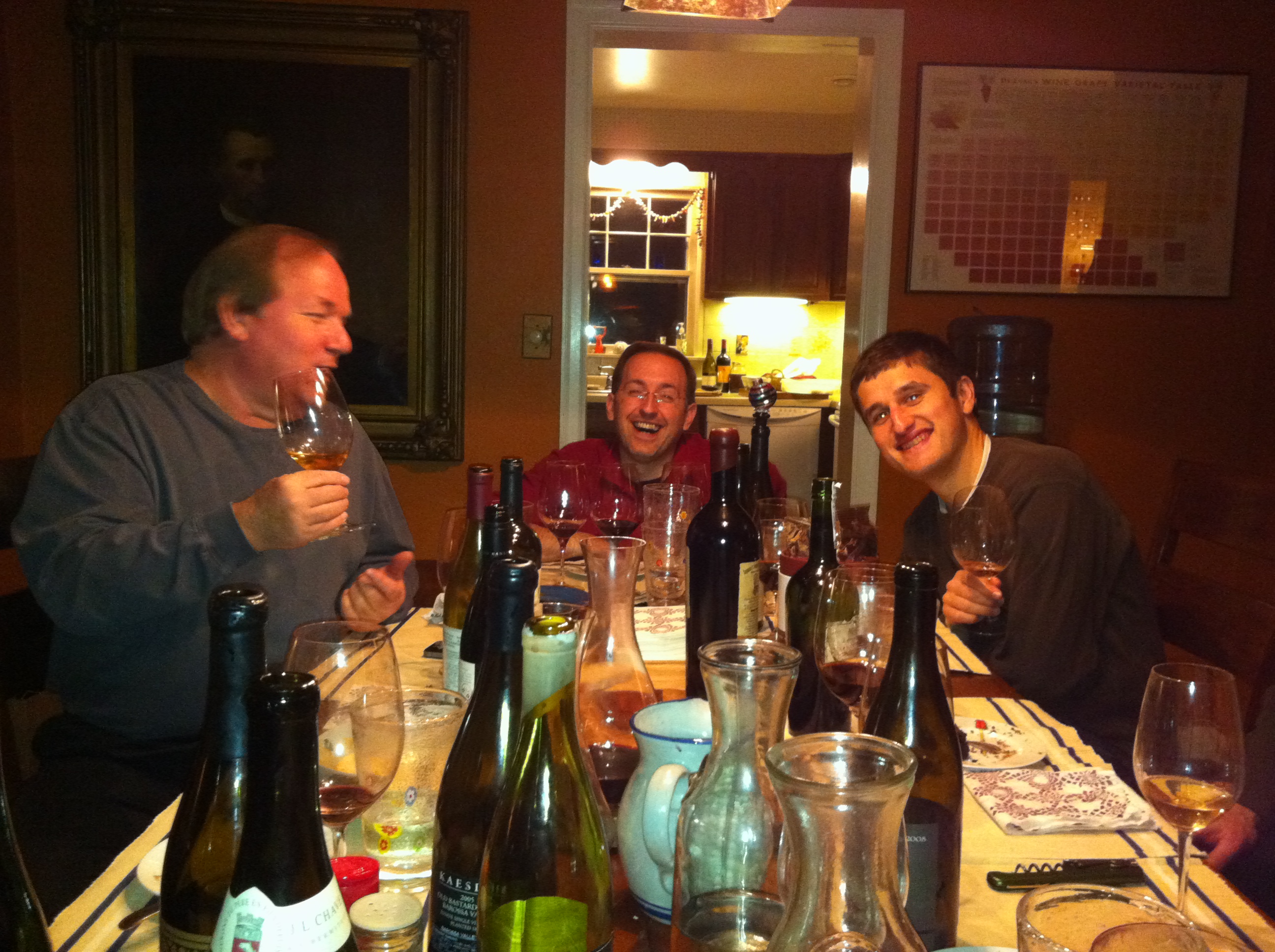 Yes, we have that much fun. And why not, with great people, fabulous food (Joe’s ridiculously swell cheese platter, my Pretty Damn Good Chili, Mark’s crab rangoon, baked goods from Dale & Reid and Brian’s Salty Tart treats), some serious ribbing of one another “” and of course the wines.

We’ve done this enough that we’ve sorta kinda figured out a few things. We used to just open a buttload of bottles and go at them voraciously. This time, we did really smart flights, none better than the first one: Beaucastel Chateauneuf-du-Pape 1990 and J.L. Chave Hermitage 2002. Sometimes old wines are just … old. Not these vibrant, balanced beauties.

We followed with a pair of 2005 Saxums (James Berry and Heart Stone, the latter, alas, slightly corked); a Pax-Carlisle throwdown (yum!) and a Down Under double-dip (Torbreck “The Struie” and Kaesler “Old Bastard,” both 2005) and sundry others, including a very nice Matello “Fool’s Journey” from, of all places, Willamette Valley.

At a certain point, my weary palate needed something bright and spritely, so I grabbed a

Two Hands Moscato 2011 from the fridge, and we finished with another palate-cleanser, the Nicolas Joly SavenniÃ¨res “Les Vieux Clos” 2009, and a Noval Late Bottle Vintage Port 1997.

It’s highly unusual on a night such as this to have almost universally great wines (even the slightly corked Saxum was tasty). But what I took away more than anything “” besides the fact that I’m blessed with wonderful friends “” was that Australian wines are way better than they currently get credit for.

Another pal had recently shared a splendid Two Hands “Bella’s Garden” Shiraz, and I’ve been coming across some under-$20 Aussie reds that rock, most notably the Oscar’s Estate Shiraz. So I wasn’t surprised that’s Two Hands’ sweet white also filled the room with joy.

Last month I put in a plug for the Old Bastard, and I still have never had a bottle of that wine that didn’t make me giddy. I might not be able to afford much of that, but I am for sure going to be buying more Aussie wines in the next little while.

And hosting another syrah night in the very near future.