The other day, the headline on a blog post by the Wine Spectator’s Tim Fish caught my eye: “What does it take to make an $8 wine?”

So when I had lunch later that day with winemaker Jim Tonjum, I couldn’t resist opening our conversation with basically the same question re. his Different Drummer wine. It’s about as nice a $12 California cab as you’ll find, with bright food but a touch of Old World dryness and elegance.

“My idea was to spend the money in places that bring the most quality,” Tonjum continued.

That, of course, would be on the grapes. So Tonjum leases space for the winemaking, does his own racking and uses a custom 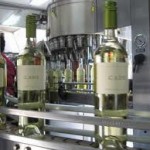 Having spent most of his working life at Beringer and seen prices of everything in Napa balloon exponentially over the decades, Tonjum knew he would need to look elsewhere for “excellent quality grapes at reasonable prices.” The east side of Paso Robles fit the bill.

One of the first things he learned at Beringer about inexpensive wines stuck with him in his drive for quality and value: “It was a lot easier to sell a better wine at a higher price than a lesser wine at a lower price.”

So how does one get a better wine at a lower price? “You don’t have to give up one iota of quality when you’re not paying for an expensive winery.”