His last name, like those of so many fellow Dry Creek Valley vintners, ends in a vowel. But Mick Unti’s ardor for Italian grapes has much more to do with his palate than his bloodlines. 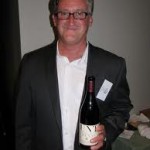 “Both my father and I are enthusiasts of wines from the Mediterranean,” Unti (left) said in his office at Unti Vineyards, “especially Italy and the South of France.”

That explains the focus of the winery that he and dad George founded in 1997: The Untis have a whopping 4.5 acres planted to sangiovese, and Mick said they will crush 25 tons of barbera this year, a quarter of their total crop. And this is smack dab in the middle of the Dry Creek Valley, known primarily as zinfandel country ““ but not for the Untis.

“It’s very difficult to make zinfandel here that has the type of acidity I like,” Mick said. “The barbera, we pick whenever we want and the acidity’s screaming. What we’ve seen by default is that the Italian and Rhone grape varieties can be grown in a variety of sites and do well. The Montepulciano and grenache, we planted everywhere. 

Of course every rule has an exception: “We planted dolcetto at the same time, and it sucks every year. 

The Montepulciano became a part of the portfolio almost a decade ago, “after Dad came back from Italy like someone had shot him up with verdicchio and Montepulciano.  It is bottled on its own ““ Mick calls the ’06 Montepulciano Unti’s best wine ever ““ and blended with the sangiovese to make a seriously tasty bottling called Segromigno (named after a town in Tuscany). The verdicchio is used in a sexy, superb blend called Cuvee Blanc.

Mick doesn’t care for either name ““ “Nobody can pronounce Segromigno, and Cuvee Blanc is not even grammatically correct, a horrible name” ““ but the wines are so popular that “we’re definitely stuck with them,” he said with a hearty laugh.

The Untis were uncowed by recent history, in which a ballyhooed “Cal-Ital” movement went belly up just over a decade ago. “Atlas Peak tried its best to ruin that movement single-handedly,” Mick said. “They made the grape version of a straight-to-DVD movie. 

No such worries now, especially with the way that Shelley Lindgren (left) at the restaurant A16 “has redirected the reputation of Italian wine in San Francisco over the course of the last few years.  Having U.S. versions of the wines turning out as delicious as the Untis’ doesn’t hurt.

Dynamic and biodynamic
I love all the Unti wines, but my favorite is probably the Benchland Syrah, from the Southern Rhone portion of their portfolio. They also make stellar grenache, thanks in part to the generosity of a California pioneer.

“John Alban supposedly smuggled in some grenache cuttings from Chateau Reyas,” Unti said. “He gave us beautiful stuff for almost nothing. We tasted the grenache and I told Dad, “˜this is really good. It’s got structure, acidity, everything we want.’ “

They had wanted some other Italian and Rhone grapes, but not all of them were available at California nurseries. “It would be a really great story to say, yeah we were chasing down all these grapes,” Mick said, “but the truth is, what we ended up with is a hybrid of what we really think will do well and what’s available. 

All of the Untis’ estate grapes are growing in vineyards that started being geared toward biodynamic farming in 2004. Here’s Mick on how that evolved:

“We drink mostly European wines, and we noticed that more and more producers in France were looking at biodynamics. In the 1970s, Chapoutier was making wines that were trés average, and that was from some really good vineyard sites. And then Michel [Chapoutier, left] took over and started converting the sites to biodynamic, and those wines were hitting some chords within us that we liked.

“So we started talking about “˜how do we get the most out of what’s going on here?’ We wanted to at least see. I had seen people have success in Europe who were risking a lot. [Biodynamic progenitor] Rudolf Steiner (left) wasn’t even intending to have this apply to grapevines, but it did. So for us, the worst that could happen is we would have the same quality and have spent a lot of work time on it.

“We’re still learning. It forces you to trust your senses a lot more, which then gives you a chance to look at more in the vineyard. It opens your mind to think about why you’re always using the same sanitizing agent, things like that. 

“If you taste the 2008 grenache, I can tell you seven reasons it tastes the way it does, and then get to biodynamic. It’s over time that the soil gets better. We learned a lot about soil composition and paying attention to what the vines looked like. These vines seem to be vigorous all the time. 

It’s no surprise that Mick Unti was a quick study on the biodynamic front. He’s the same guy who, like his father, made a career switch from retail to wine and dove right in, brain-first.

“Once I got the wine bug, I found myself reading on a nightly basis,” he said. “My ex-wife used to joke about how I had a pile of wine publications under the bed instead of Playboys. 