Although he says “I think of myself more as a vigneron than a California winemaker,” it’s no surprise that Mike Sullivan ended up with the latter job title. His destiny should have been clear early on. Very early on.

“When I was really young,” he said, “I thought I’d want to be a pharmacist or something science-leaning.  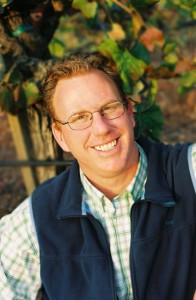 Now that he’s a strapping adult, Sullivan’s expertise in chemistry and botany have helped make Benovia one of Sonoma’s best wineries.

He started working in the Sonoma Coast and Russian River areas in the late 1980s and became winemaker at Hartford Family Wines, where his offerings got consistently high (and well-deserved) scores from the critical powers that be. In 2005 Sullivan, who still looks like he could play power forward at the college level, got a chance to add general manager and part-owner to his job titles at Benovia.

The vineyards Benovia purchased over the last decade grew fruit that went to the likes of Kosta-Browne and Williams Selyem, but the land around the new winery was mostly fruit trees. “Apple and plum trees have gone the way of the dinosaur around here,” Sullivan said with a chuckle.

That’s because this is prime turf for the grapes that made Burgundy famous: pinot noir and chardonnay. 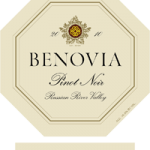 richness and minerality, with gorgeous pineapple flavors and nice depth. The “Bella Una” Pinot Noir had the same yin-yang properties and a long, elegant finish.

Sullivan said he and his team “look for texture and density all the way from when it’s juice. But in terms of structure, with pinot noir it comes at the end.  Like most pinot-philes, he’s very exacting about this finicky grape. “Pinot noir needs to be picked on the right day and crushed on the right day. With cabernet there’s nothing you can do to improve the quality. You’re just preserving. 

Pinot, he added, “is kind of an endless discovery. With cab there’s a discovery phase and then that’s it. With pinot noir, the more layers of the onion you peel back, the more you find. With pinot you can be drinking a very simple one, a Beaune-Villages or Santa Lucia Highlands blend, and get a great experience. With cab you only get that at the high end. 

Having a varietal he cherishes so much might help explain why Sullivan has become more judicious in his use of oak over the years. “It’s a cliché,” he said, “but when you’re younger, more is better. Now I’m at 40 percent new and probably dropping from there. It’s a player, but it’s got to be a background player. 

Minimizing the effects of the oak fit in with something every good botanist knows: A wine’s duty is to let the vineyard shine.