It’s been a glorious stretch of weather, food and trade tastings, not necessarily in that order. As I collate my notes from the events, I also have encountered some fascinating (at least to me) aspects of wine:

• Had an interesting tasting experience with my friend Mark earlier this week. We were checking out four cabernets from Sonoma and Napa, from the 2011 vintage save for one. They were nice enough, but all had “holes” in them: no midpalate or no finish or too much greenness or too soft tannins. So we decided to mix a pair to fill in the holes. Olema’s ample midpalate helped punch up Hook & Ladder, and Hook & Ladder’s nice finish filled in Olema’s almost nonexistent one, while Olema’s black fruit and Hook & Ladder’s red fruit played together nicely. Then the Freemark Abbey’s sturdy structure  and fresh midplalate enhanced Hook & Ladder, while the latter’s bright berry flavors offset the “green” elements of the Freemark Abbey. 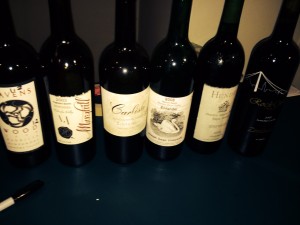 I often urge budding wine enthusiasts — or, hell, experienced ones — to get a group together and have everyone bring a similarly priced version of the same varietal. I will now add this counsel: Think about individual wines’ imperfections and see if another wine on hand can mask or offset them. Fun stuff.

• I get weekly emails from the fabulous magazine Lapham’s Quarterly with excerpts from an article, and the most recent one had this from a letter written by English author Charles Lamb in 1930:

“It is an observation of a wise man that ‘moderation is best in all things.’ I cannot agree with him ‘in liquor.’ There is a smoothness and oiliness in wine that makes it go down by a natural channel, which I am positive was made for that descending. Else, why does not wine choke us? Could Nature have made that sloping lane not to facilitate the downgoing? She does nothing in vain.”

• The rewards of going to Wine Country are many and varied. One that came up on our recent Sonoma sojourn unfolded at the MacPhail tasting room in 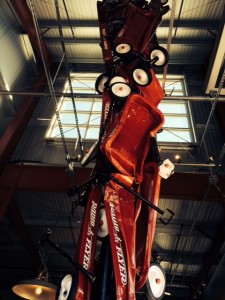 the seriously cool Barlow complex in Sebastopol. The pinots were superb, and the wagon sculpture (left) was swell as well. But perhaps the most fun part involved trying two 2012 chardonnays from the same vineyard, Gap’s Crown. They even came from the same tanks, with one batch staying away from oak and the other getting a moderate oak treatment.

The unoaked wine was gorgeous, with a big, tropical nose and buoyant flavors, very expressive. The oaken rendition was more lush, and the oak was apparent, but it actually magnified the fruit rather than subsuming it, on the nose and palate. Both were exceptional wines, but conventional wisdom holds that oak tamps down fruit flavors, and that was far from the case here. Live and learn, I reckon.

• Trying to decipher the standards around labeling on American wines is a mission from Hades. But Decanter’s Andrew Jeffords explains (and elucidates a bit):

“Another layer of trust concerns the information which consumers can find on labels, and in particular information about variety, vintage, alcohol level and regional origin. Much of this looks precise, but is in fact approximate. In most US states, for example, a 2013 varietal Chardonnay labeled 13% abc [alcohol] could include 25 per cent Muscat, be 14% abv (or, less probably, 11.5% abv), and include 15 per cent of wine from 2012.

• Finally, this apparently is a thing (in more ways than one): 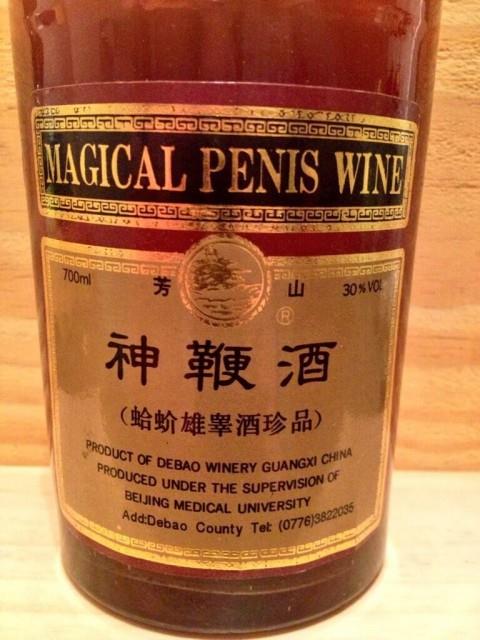