I’m behind on, well, everything, including some anecdotes from my wine world:

• I probably have mentioned how much I enjoy getting daily missives from a website called Delancey Place, which disseminates brief portions of stellar nonfiction books. Loved (and learned a lot from) this passage from “The Widow Clicquot” by Tilar J. Mazzeo:

“Dom Pérignon [left] was justly famous for his superb skills as a blender — but his legendary wines did not have bubbles. This is one of the great ironies — we might even say great deceptions of wine history, for conventional wisdom tells us that Dom Pérignon was the delighted inventor of champagne. He is supposed to have quipped to one of his sandal-shod brothers, ‘Come quickly! I am drinking the stars!’ Yet it only made sense that Dom Pérignon wanted to rid champagne of its bubbles. There was no market for sparkling wines yet. In France, nobody wanted them. So, over the course of the next decade, Dom Pérignon dedicated himself to experimenting with ways to stop the development of bubbles.”

• Speaking of bubbles, a couple of Champagnes were among my favorite discoveries at the annual Saint Thibault Day event link in beautiful Frogtown. The Drappier Brut Carte d’Or was simply stunning, full of energy and flavor and endless layers. My friend Jason had heartily recommended Pierre Caillot’s bubbles recently, and my first actual encounter 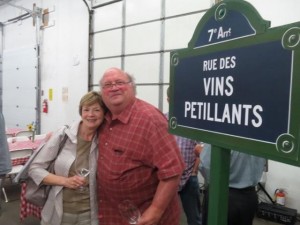 exceeded the resulting high expectations. The winery’s Grand Reserve is yeasty/citrusy splendor, nigh onto perfection. (That’s me with one of the dearest people I know, Colleen Colbeck), at the Champagne “Rue.”

• One of our best wine writers is moving on to other ventures, alas. But Bill St. John’s farewell column in the Chicago Tribune is a gem. It’s all about what he has learned over the years, including this gem: “Wine is the sort of alcoholic beverage that does not destroy but enriches life, does not distort but clarifies perspective, does not seduce except in a way worth being seduced.” Truer words have never been spoken.

• A couple of recent Star Tribune columns had, as usual, to be trimmed for space, so I left out some cool stuff. In a look at how consumers are much less varietally oriented, Kowalski‘s Brian Mallie had this to say when asked if local shoppers are more likely to ask staffers for help than perviously: “No, I have not seen more of that. Minnesotans are loathe to ask for help. They’d rather chew their arm off and run out the door.  Even though they have more choices, they are not any more receptive to help than ever.”

And in a piece about three new high-end Italian restaurants’ wine lists, Parella‘s Mary Kole Macdonald made a distinction I never had heard, between “thinking wines” and “drinking wines.” “Preferably a wine is both,” she added. I like that characterization a lot; might be worth an entire post, actually.

• So might this: the aging potential of rosés. I recently had a 2013 Arnot-Roberts Luchsinger Vineyard Clear Lake Touriga 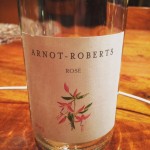 Nacional Rosé, and it was simply fabulous, decidedly better than the bottle I had quite enjoyed last winter. The wine was focused and harmonious, in a perfect place. A few years back, wine maven Clark Smith semi-jokingly (I think) told me that all rosés should be set down for a year before being released. I’m not sold on that idea, but this wine as well as Bandol rosés certainly don’t need to be opened the year after their harvest date.