I had a wonderful time catching up with some of my favorite wine folks last week at the Dan Berger International competition. Among the highlights: 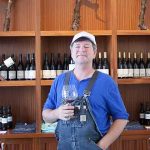 • The inimitable Greg La Follette caught me up on his latest project. While still making the fabulous La Follette pinots, Greg has launched Alquimista Cellars, he’s making a blend of, wait for it, pinot and zinfandel. Can’t wait to taste it, especially given how pumped Greg is about it. FYI, this is the guy who launched Flowers, then and now one of California’s great wineries.

• My buddy Ron Washam, a k a the ever-witty Hosemaster of Wine, is married to a 45-year-old woman, a good bit younger than he. His rationale: “I told her I wasn’t robbing the cradle, that she was robbing the grave.”

• Earlier in the day, Ron had uncorked another masterpiece on a certain orange-hued celebrity. And he was interviewed at a cool new (to me) British site called Vinolent. I love the writer’s characterization in the intro of most wine writing being “either self-important tosh or vapid clickbait drivel.” 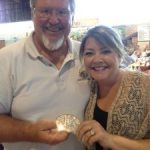 • All in the family, or not: Gary Eberle’s wife, Marcy (with Gary at left), told me she recently came up with what has proved a seriously successful idea: selling parts of their barrels, and burnished vines, at the Eberle tasting room. They’re selling like hot cakes, Marcy said, especially the old pulled-up vines that, when power-washed, “get this great mahogany color to them.” Gary also was talking about his winemaker, Chris Eberle. When I asked, “Your son?” he said, “No relation. We just found each other.”

• My friend Tom Bohr was magnanimous enough to share with us a 1966 Charles Krug Cabernet Sauvignon. 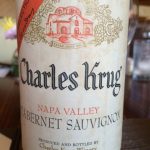 What a wine, maybe the best old California cab I’ve ever had the great good fortune to try. It was seamless, the picture of harmony. And it was 12-percent alcohol. 12. Maybe that had something to do with why it has aged so well over 50 years, ya think?

• On the last morning my computer was hacked, and tons of people got spam email from me. When I told Dan Berger about it, he quipped, “I saw that, but I knew it wasn’t you because it had the word ‘kindly’ in there.”

I’ll be back with more on the actually judging ASAP.