A decade ago, Ryan Hodgins headed west in a Volvo station wagon “with the bumper about 2 inches off the ground. A lot of folks in Minneapolis thought I was crazy.”

Like a fox, it turns out. Now Hodgins is the chief winemaker at one of Mendocino’s top houses, FEL Wines, and he and wife Molly have their own label, M. Autumn.

At the M. Autumn website Molly is designated “Mama/Grapes” and Ryan as “Papa/Wines,” but this Portland native (at left) is a vineyard nut, too, having served as viticulturalist at the iconic Hanzell winery, where he worked with America’s oldest pinot noir wines. (Molly is viticultrualist at Oregon’s Chehelam.)

I asked him something I always try to get from vintners: What is the most important part of a winemaker’s job? “It’s being in the vineyard,” he quickly answered, “knowing your grapes and having the pulse of what’s going on “My time is better spent in the vineyard. ”

That’s especially true when a guy has a chance to work in a vineyard such as Savoy, one of the few truly outstanding and distinctive sites in the country. Cliff Lede bought Breggo (now FEL) in 2009 and recently also closed a deal on Savoy. This dual ownership, Hudgins said, “has given me the ability to never compromise on quality.”

That includes making sure only stellar wineries — Radio Coteau, Littorai, Barnett, Peay, Roessler — end up with “Savoy Vineyard” on their labels.

But FEL’s focus is more diverse than its superb pinot noir and chardonnay from Savoy. Hodgins is particularly enamored with “the Alsatian whites that do really well” in the Anderson Valley. 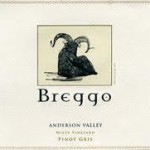 “It’s really touchy because unlike any other grape I work, it’s the most ready to lose its acid,” he said, “so we pick early, at 22 brix. It goes from a weird yellow to pink as soon as we start picking.”

That’s a far cry from knocking around Minneapolis, although Hodgins said that if he had stayed here, he might have followed a similar path: “I probably would have made beer.”

As it turns out, a lot of like-minded folks have turned the Twin Cities into a craft-beer-making Mecca. So it’s probably best that he’s making superb wines with a sense of place, even if that place is near a hamlet called Boonville, which he calls “the most appropriately named town in the world. “ Hodgins is clearly right at home in the vineyards there.