Not in terms of personality. With short-cropped auburn hair, soft-spoken demeanor and mud-crusted jeans and boots, the proprietor of Drew Family Cellars looks like a 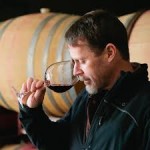 But geographically, well, he’s growing grapes on the westernmost site in Mendocino County — a winding 30-minute drive from Boonville, with nothing around that says “this is wine country” — and probably the coolest.

“We’re right on the edge, 60s and low 70s in the summer,” Drew said. “It was a leap of faith being this close to the ocean [he can glimpse the Pacific 1,250 feet below, 3.3 miles away]. But the soil was excellent, and it’s cooling above the fog line [800 feet]. There are no frost issues, and we get a lot of rain, which helps us dry-farm.

“Overall, the climate, the soil was just what we wanted.”

Oh, and the land, now called Field Station Ranch Vineyard, already was certified organic, as an apple farm, when Jason and Molly Drew bought it. (There’s still part of that orchard adjacent to the vineyard.

In such a cool climate, Drew said, “the main concern is getting yields. We hope for one and a half tons, maybe two tons an acre.”

This is, of course, pinot noir country. But that’s not all. “The pinot noir is so well-suited for here, that’s one reason I’m trying syrah,” he said. “Pinot noir is a good challenge; you never get bored. Syrah is a little more forgiving, so starting syrah made sense.” 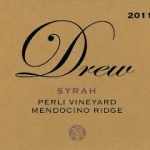 All of these wines currently come from other sites, because the vines at his farm near something called Elk, Calif., are only a few years old.

But the winemaking skills arrived with Drew, who worked at wineries in Australia, Napa, Sonoma, Mendocino and the Central Coast, all the while learning from the likes of master vintners Cathy Corison, John Kongsgaard and Brian Babcock.

The biggest influence? “It’s an accumulation of experiences, drawn from all of them,” Drew said.

Aw, c’mon, surely somebody … “Well, John Kongsgaard basically convinced me that native fermentation is just a natural, the purest way to go,” said Drew, adding that he got a side lesson in fearlessness. “A couple of times the wine stuck, and he’d go, ‘Oh, that’s normal.’ ”

So Drew now goes with native yeasts, and said he also tries to keep all his wines under 14-percent alcohol.

Still, he is quick to add that “I like not having rules etched in stone.” When he’s concerned about structure, he’ll go with more whole-cluster fermentation, and when he wants more extraction, he’ll do a whole lotta punchdowns. No such concerns with the 2012 vintage, which, Drew said, “gave you everything: purity, structure, complexity.”

Can’t wait to get my grubby little paws on some of those.