• Three guesses as to what grape cabernet sauvignon just supplanted as the most widely grown one in the world. 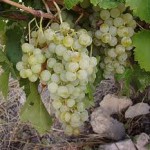 Actually, 300 guesses might not suffice. It’s pictured at left and is a homonym for baseball’s career home-run king, pre-Barry Bonds.

• OK, on to the geography, parts one and two. From the Wine Enthusiast comes a handy-dandy U.S. map in which a click-through displays each state’s wine shipping laws. Rival Wine Spectator chimes in toward the bottom of a Tim Fish post with a chart mapping out what our drinking preferences might indicate about our political leanings.

• Finally, the week’s most flabbergasting press release came from the folks at Riedel, who make stellar glassware but clearly are getting bored. They’ve come out with a special glass for Coca-Cola (!). Which costs $19.30 (!!!). As my friend Rolf waggishly wondered, how soon before they come out with a glass for the kalimotxo?