That’s the premise of an interesting article in Decanter about research indicating that, on these shores at least, the aging of this generation will affect sales of spendier California wines in particular in such a way that younger drinkers cannot (or will not) make up for it.

Now that’s assuming two things: that Boomers have stopped or will stop buying wine, or at least as much wine as they have been. And that Generation X and Millennials won’t embrace high-end wines with nearly the same passion as their elders.

The second notion is quite plausible. Not only might under-50 types not develop the same passion for $50-plus cabs, they might not be able to afford them. Between lower wages,

the burst of the housing bubble, student loans and other factors, they are not projected to have as much disposable income as Boomers have. As Sillicon Valley Bank’s Rob McMillan (left), who presented the report, said, “The economic headwinds that the younger generation faces are of a magnitude worse than they were for Boomers.”

And of course they might choose to spend what they have on something other than expensive wines. They already have more really good $15 to $25 wine available to them than anyone ever thought possible. So they can buy two or three bottles of very nice wine and something else for what Boomers have been paying for one Caymus cab.

As to Boomers’ buying habits now and in the future, it’s a mixed bag. The research, Decanter reports, notes that those “between 48 and 65 account for 44% of U.S. wine sales and are retiring at a pace of 11,500 per day.”

Retiring ostensibly means buying less wine, if only because of less income (and those younger generations have an effect here, too). And of course for collectors, being of a certain age brings with it the concern that our taste buds will fade before wines such as nebbiolo, cabernet and vintage Champagne reach their optimum drinking stage.

In my small circle, that is oft discussed but rarely heeded. One 70-ish friend is still buying Barolos and cult cabs by the case, even with a cellar bulging with 2,000 or so wines. Others have talked about scaling back on Burgundy and Brunello but haven’t followed through.

It’s not a factor for yours truly. I might buy one wine a year that’s over $100 (or I might not), partly out of principle, partly to preserve my marriage, but mostly because I’d rather 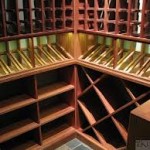 unearth new gems in the $30 to $60 range. Plus, while I’m fortunate to have friends who share wines from a decade or three ago (with decidedly mixed results), I tend to like my reds young.

And  I want to fulfill the dream of so many wine lovers: to have my cellar be empty, or nigh onto it, when my body slips the surly bonds of Earth.