I’ve long since given up aspiring to bring the “wine of the night” to a gathering of vinous acquaintances, and not just because so many of them have bigger, older and spendier cellars than mine. Where I’ve landed, aspirationally, is somewhere between prompting gurgles of delight and avoiding outright embarrassment (it helps that I don’t shame easily). 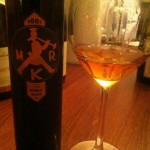 formidable opposition: a Sine Qua Non dessert wine (left) that nectar-of-the-gods’ed its way past some wonderful Joseph Drouhun reds from the 1990s, and the top vote-getter at my friend Burgundy Bob’s annual Zinfandel night.

The latter was a 2006 Carlisle Rosella’s Vineyard. Based on that experience and a more recent quaffing of an ’06 Papa’s Block bottling, those of you lucky enough to have 2006 Carlisle zins might wanna pop a cork on one or all of them post-haste; sure, they’ll last awhile longer, but I can’t imagine these wines getting any more delicious or harmonious.

Anyway, I had been feeling enough uneasiness about a certain bottle of mine that I wanted to wait for the right crowd with which to pop the cork. Last weekend that opportunity arrived, during a casual dinner with my way better half, her best friend from childhood Marie and our pals Joe and Kris.

Joe was bringing two 2005 Willi Schaefer Gracher Domprobst Rieslings, an auslese and a spatlese, and I threw in a 2008 Aubert Lauren Chardonnay, so I could put aside any notion of having the night’s foremost wine with my other offering:

That is no typo, and certainly not a delusion of grandeur. Last year, I had spent an afternoon at the Conn Creek winery on Napa’s Silverado Trail enjoying its “blending experience. 

We sampled cabernet sauvignon from a half-dozen Napa appellations, plus merlot, cab franc, petit verdot and malbec from the valley. Then our “chore” arrived, in the form of making like a real winemaker and mixing portions to determine a final blend.

Best I can recall, mine ended up being 65 percent cab (mostly from Stags Leap and Spring Mountain), 15 percent cab franc and 10 percent each of merlot and petit verdot. When it finally came together in the bottle, I was really excited “¦ until I tasted it. Booooooring. 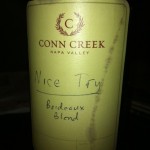 The Conn Creek folks waxed and sealed the bottle and told us to name it whatever we wanted. Mine was easy: “Nice Try. 

Except “¦ 20 months later, it was truly delicious, a touch soft but packed with blue and purple fruit and finishing smooth and longish. Five nights later ““ it was a very busy week here ““ the last third of the bottle was still a darn good wine.

The lesson: that anyone can make a tasty bottle of fermented grape juice with the right ingredients. Maybe even a “wine of the night. 