So it was another swell evening at my friend Joe’s, with an array of wonderful wines and great food: When this group gets together, most of the bottles don’t get finished. Best I can tell, out of more than 15 table wines uncorked last night, only three got finished. None of a half-dozen chards, even a lovely Bouchard Meursault-PerriÃ¨res, ended up empty; former flame Aubert again disappointed.

The pinots were solid but had a bit of sameness to them. In a bit of a surprise, given the formidable competition (Kistler, Sojourn and Rivers Marie), only the Hartford Court Hailey’s Block 2005 prompted universal enthusiasm.

But the wine of the night probably was a Bordeaux that was new to me. Now most Bordeaux are new to me; I’ve never had the moolah to dive deeply into the region, and found uneven results with the less spendy stuff. Plus there are 80 gobzillion wineries there, and a guy can’t master every wine region unless he wants to get some of those sommelier initials after his name, so I mostly haven’t gone there.

(It would have been easier if I could have accepted any of several Bordeaux junkets that I’ve been offered in my newspaper job, but the ethics policies of the institution and yours truly make that a non-starter.) 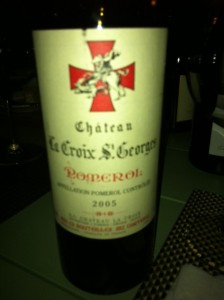 But I digress. The Chateau La Croix St. Georges Pomerol 2005 that our friend Denny brought was sublime. Not profound, but an earthy delight with integrated everything. Just elegant enough. Blissful finish.

It got us to talking about a couple of things. First, how hard it is to find Napa wines this good at that price point ($40-$50). I’d put the Shafer merlot up against this wine (also likely mostly merlot, given its provenance), but few if any others. Basically, a savvy shopper can probably do better at that price range in Bordeaux than California.

The other conclusion we reached was that this kind of Bordeaux, or at least the 2005 vintage, might not be susceptible to the ups and downs that age-worthy French wines tend to go through in their evolution. (That’s another reason I haven’t invested much in Bordeaux over the years: the tales of “dead zones.”)

“This is a wine, and maybe a vintage, that isn’t going to go through a ‘dumb’ period,” Denny said. He might be right. One of my favorite things about wine is that we don’t know these things for sure, and will be forced to keep on sampling bottles such as this to try to figure it out.

Or not. It is, after all, about the journey, not the destination.