So I recently reached a landmark birthday, and one of the very best parts of a multi-day celebration was spending an afternoon and evening with my friends Nick and Larry. Not because they are even older than me :o, or because they have a lot more great old wine than I do, but because they are two serious candidates for “the most interesting man in the world.”

It was a gorgeous afternoon and evening, perfect weather, so we spent the entire 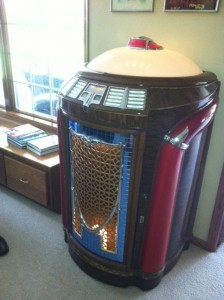 time outdoors. The only downside was not being able to fully listen to Nick’s seriously cool jukebox, a late-’40s Wurlitzer (original, not a replica) that plays 78-rpm records.

But we were able to nosh on Wagyu tenderloin and artichokes all afternoon and a Nicoise salad after our better halves joined us. And work our way through a fascinating array of wines.

We marveled at how much more tannic one 2001 Brunello di Montalcino was than the other. “Brunello shouldn’t have tannins like that,” Larry said.

As we tasted an ’01 aglianico, Larry recalled an early experience with that varietal, with a bottle that “smelled completely like a bowl of freshly picked raspberries; nothing else, just pure raspberry” — and his fruitless (pun intended) search for a similar experience with an aglianico.

We talked about biodynamic wines and growing and the biodynamic tasting calendar, and reached no firm conclusions other than that people who farm biodynamically tend to make really good wine.

And as often happens with older bottles, what should have been one of the lowlights 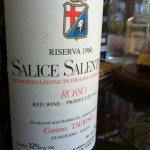 turned into one of the highlights. A 1986 Salice Salentino, your basic $6 wine when purchased, was pretty much spent but had a singular aroma, a la Larry’s raspberry experience. We worked our way there, through “vegetal” and “celery” and “braised celery” until we nailed it: The wine smelled exactly like celery salt.

But one of the reasons I love these guys is that they are great conversationalists who know well enough not to talk wine to death. We had jokingly set up the day as a “we’re gonna solve the problems of the world” gathering, and when that topic finally came up, only I put in my two cents: “We need to have at least 80 percent of the world leaders be women. I won’t make generalizations about genders, but men have more than had their shot at this.”

Larry and Nick talked about what to do when you run into old friends and enjoy a lunch or beverage with them and catch up sufficiently. “They will inevitably say ‘let’s do this again,’ and I hate that,” Larry said. “Even if we both wanted to get together again, you can’t duplicate that experience.” True enough.

While thoroughly enjoying a younger wine from E. Guigal, we touched upon our perfectionist 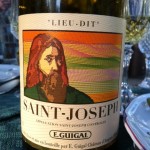 natures, and Larry was delighted when I threw out one of my favorite aphorisms: “The perfect is the enemy of the good.”

We started to address how this applied to winemaking, but then thought better of it. This was, after all, a day not to deeply ponder such matters, but rather to simply savor. And as we parted, I couldn’t resist saying:

“Let’s do this again soon.”