Talk about a back story …

Bill Taplin and his two siblings have been making wine for just a few years, but their family has a legacy that might just be unmatched in the Napa Valley.

One side of their clan introduced fruit orchards to the area, and the other side became Napa’s first dairy farmers. Both have streets named in their honor (Taplin Road and Lewelling Lane), marking where each alighted in the middle of the 19th century.

A century and a half later, Bill, Stephen and Melinda Taplin decided it was time for the family to make wine. Cabernet, in fact, from one of the choicest spots in the valley, Most of the Taplin Vineyard fruit goes into Orin Swift’s most expensive wine, “Papillon,” but the Taplins started using some of it in the 2007 vintage.

“We’re still getting our feet wet,” Bill Taplin said as we sipped big, bold, hearty, expressive 2010 and ’11 terra 9 cabernets. The tannins and structure on these wines reflected what Taplin said about the winery’s philosophy: “We’re more interested in a French style, a classic style.” Helping that approach along is winemaker Julien Fayard, who grew up in France and worked at Chateau Lafite-Rothschild.

Bill Taplin, on the other hand, was born in Napa and left as soon as he could. “I just wanted to get the hell out of here.” He still 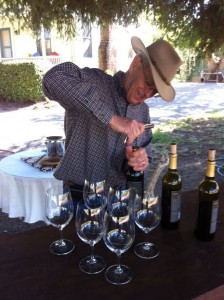 works as a civil engineer in San Francisco, and Stephen (left) is an internationally renowned researcher at the National Institutes of Health. But eventually something inspired them and Melinda to do what so many newer arrivals in Napa (which would be most everybody) do: make cabernet.

Maybe it was just in the blood of these fifth-generation Napa farmers.

John Orange Taplin was a dairy farmer who headed west from Vermont and then decided that 1950s San Francisco was too crowded for his work and embarked 60 miles to the north.

John Lewelling was a fruit farmer whose Quaker abolitionist family “kept getting kicked out of states with slaves,” Bill Taplin said. (There’s still a Lewelling Quaker Museum in Salem, Iowa.) They ended up in Oregon, where he and brothers Henderson and Seth, plus Chinese nurseryman Ah Bing, developed the Bing cherry. John headed south and became the first person to graft fruit trees in Napa.

The two pioneers’ descendants, Albert Taplin and Ethel Lewelling, married, and the family farm was focused on hay, turkey, walnuts and prunes, pretty standard stuff in Napa until last quarter of the last century. 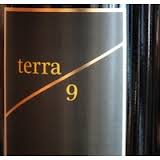 Even the name of the wine has historical family ties. “My dad always told a story about his dad,” Bill Taplin said, “about how he would say that every shovel full of dirt is nine parts rock, so we came up with ‘terra 9’ for the wine.” The labels include handwritten script from the family dairy accounts.

In an almost literal sea of Napa cabernets, such a legacy can make a difference

“Because there are so many wineries here [400-plus],” Taplin said, “to have the kind of history we have sets us apart.”

Making Napa cabernet of this quality for $60 doesn’t hurt, either.