There’s a lot of cool stuff on the walls at Calera’s tasting room near Mt. Harlan, especially the maps of the seriously steep area that Josh Jensen single-mindedly turned into a wine mecca. Perhaps the most compelling item is a poster-sized photograph of the Calera founder himself wearing a smile almost as tall as the two Japanese ladies pressing against either side of him. “Josh has been a rock star in Japan since the 1990s,” said our amiable host, Minnesota native Marta Rich, the winery’s sales manager. “He goes there once a year, and people line up around the block to get his autograph. 

Now many a vintner is widely admired on these shores, but not even Robert Mondavi drew long autograph lines. At a dandy little winery on Spring Mountain, Shawn Guilliams once told me that she and her winemaking husband John “are rock stars in Omaha.  While the Guilliams wines are worth seeking out, it should be noted that they’re from there, she was speaking jocularly and, well, it’s Omaha.

But a whole nation?

Turns out it’s all about a comic book. The Japanese love their comic books, especially of the “manga” ilk, and a wine-themed one called “Sommelier” has had an enormous cult following for nigh onto two decades.

In a mid-’90s passage, two very competitive sommeliers were holding a blind tasting. One of them said confidently that the wine being poured out of a bag was Domaine Romanee-Conti, widely revered as the world’s best pinot noir. His nemesis pulled off the 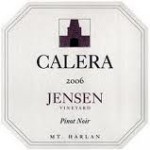 Boom goes the dynamite: That’s all it took to get thousands of the comic book’s devotees to clamor for a bottle of Calera Jensen. Today, Calera is in 47 states and 22 countries, but actually ships more than a quarter of its wine to Japan, Rich said.

Of course the comic book was merely the trigger, in the way that a catchy brand name or winery label can prompt the initial purchase. After that, what’s inside the bottle has to be engaging or compelling enough to get a customer to come back for more.

And Calera certainly delivers in that way, with an outstanding viognier and several tasty pinots. As for the Jensen, to my palate it rivals Mount Eden and Rivers Marie as California’s very best pinots.

Turns out the Japanese were on to something here.