I am bummed that March is over, even though I have been sick twice (thus the lapse in posts). Usually one of my least favorite months, it has been glorious (borderline ridiculous) weather-wise. But I’m mostly bummed because local promotions for Washington wines have come to an end.

The month started with a slew of winemakers from the Evergreen State coming to the Twin Cities Food & Wine Experience, which had a large, and always packed, Washington wine space. 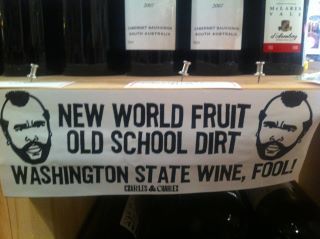 I had a great time serving on panels with some of these vintners on both days of the event. During one of them, moderator Chad Johnson said something that crystallized why these wines have always proved alluring to me: “People from Napa say our wine tastes like dirt,” Chad told the sold-out room. “We say ‘good!’ ”

That element of “dirt” does distinguish the red wines of Washington, and provides a counterpoint to the ripe fruit found in most New World (non-European) wines. The Napa folks might tout “Rutherford dust” from that appellation’s wines, but there’s no question that Washington’s reds are decidedly earthier than Napa’s. Chad and Corey Braunel’s winery ain’t called Dusted Valley for nothing.

And that’s the way (uh huh, uh huh) I like them: rich and rustic, showing flavorful fruit but also tasting like the ground they came out of, rather than like something concocted in the winery.

My buddy Joe likes to talk about wines that are “honest,” which can sound like a euphemism (a la “interesting”) but actually is a compliment. It means there’s no trace of being manipulated, or as we like to term it, spoofulated.

This is not so much about the wine world’s raging debate about “natural” wines as it is about taking what the vineyard and vintage gives you and making wine that reflects iconic Stag Leap winemaker Warren Winiarski’s three G’s: the grape, the ground and the guy/gal making it. Even Washington’s mass-produced products, from the likes of Columbia Crest, Chateau Ste. Michelle and Hogue, have a genuineness that averts the dreaded leap from wine to commodity. And those I tasted at the experience “” from Northstar, Milbrandt, Saviah, Dama, Long Shadows and others “” were earthly delights, with power meeting elegance, and with fruit, acid and mineral in glorious harmony.

Before the event, I had written glowingly in my day job about Washington’s merlots. I just might have been underestimating them and their stately companions.