Jeff Stewart has a great gig, and is wise enough to know it. And to make it better.

He stepped into a job where he “didn’t have to fix anything.” He has access to stellar grapes from throughout western Sonoma County. And he has a swell boss who doesn’t interfere, who just asks that Stewart make delicious wines. 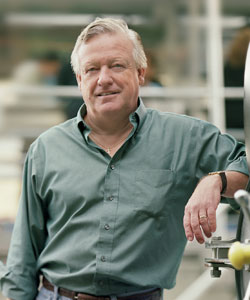 Hartford Family owner Don Hartford (left) “doesn’t even write down notes on aromatics,” Stewart said. “He just cares what it tastes like.”

And what Hartford and Hartford Court wines taste like, year after year, is hearty, harmonious goodness, and more than a little like the ground from whence they sprang. These chards, sins and pinots from the Russian River Valley and Sonoma Coast regions are crafted around what the vineyard and vintage provide, rather than with a particular theme.

There is “no Hartford style,” Stewart said over a delicious, “big” but graceful 2010 Lands Edge Chardonnay. “We want to make a wine that shows the strongest characteristics of that vintage.”

I mentioned my recent preference for appellation wines over single-vineyard offerings and wondered if winemakers rather enjoyed and perhaps preferred concocting a kick-ass blend from many different part of, say, the Russian River Valley instead of just taking what a single vineyard gives them. Stewart’s response surprised me.

“In some ways the appellation wines are more fun,” he said, “because then it’s ‘How do we craft this wine?’ But we do the same thing with the single vineyards. Like the Fog Dance: We have two clones, pressed and fermented separately, different barrel choice maybe. So we might have 25 barrels that are all different. Some barrels don’t make it; they’re nice wines but don’t play well with the others.” 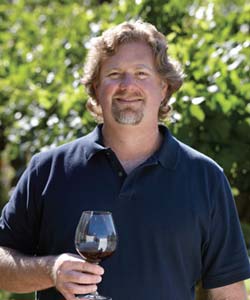 It helps to have great grapes, and Stewart (left) gets an almost wistful look in his eyes when he talks about the Russian over Valley. “You go to Burgundy and for 20 miles the terrain is the same. You go to a lot of areas and it’s the same,” he said. “Here, over five miles, even two miles, there are big differences. “¦ The best soil is what we call ‘the gold ridge series’; it’s old sea bottom.”

The winery has worked with the same growers for years, even decades, and has quite of few of its own vineyards. “We spend a lot of time farming,” said Stewart, whose strong hands certainly could belong to a full-time farmer. “We want to showcase the grapes. Why would you want your wine to smell like oak? We’re making wine, not juice.”

What they’re not making is wine for critics, Stewart said. “Some of our wines are not always the highest-scoring wines. They might be a little more reductive.

Still, they garner more than respectable ratings from Parker’s Wine Advocate and other magazines. They certainly have an avid follower in yours truly. For years, I was a member of the Hartford Family club, getting two shipments a year. Not a disappointing bottle in the bunch, and many were profoundly pleasurable.

When I started on the list, the winemaker was Mike Sullivan, now at Benovia. Rather than being daunted by succeeding Sullivan, Stewart relishes what his predecessor left him.

“I didn’t have to fix anything. It was like a vacation. All of the pieces of the puzzle were in place,” Stewart said as we sipped an earthy but silky 2009 Fog Dance Pinot Noir. “Mike did some subtle tweaking, adding new vineyards.

“But there’s always more to do. You can always do better. The day you think you’ve got it made, it’s time to retire and go work in a library.”