For obvious reasons, I can completely identify with burly bald guys who love Champagne. Like Winston Churchill, who had this to say about those sparkling delights:

• “A single glass of Champagne imparts a feeling of exhilaration. The nerves are braced, the 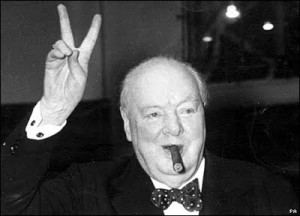 imagination is agreeably stirred; the wits become more nimble. A bottle produces the contrary effect. Excess causes a comatose insensibility. So it is with war: and the quality of both is best discovered by sipping.”

• “Meeting Franklin Roosevelt was like opening your first bottle of Champagne; knowing him was like drinking it. 

• During World War I: “Remember gentlemen, it’s not just France we are fighting for, it’s Champagne!”

• “We lived very simply — but with all the essentials of life well understood and provided for — hot baths, cold Champagne, new peas and old brandy.”

• “Champagne should be dry, cold, and free.”

• “In success you deserve it, and in defeat you need it.”

• “Champagne is the wine of civilisation and the oil of government.”

And here’s the ever-witty world leader in other imbibing endeavors:

• “Madame, I may be drunk, but you are ugly, and tomorrow I will be sober” – reportedly said in the House of Commons to Labour MP Bessie Braddock (left)

• “I have taken more out of alcohol than alcohol has taken out of me.”

• “Dinner would have been splendid…if the wine had been as cold as the soup, the beef as rare as the service, the brandy as old as the fish, and the maid as willing as the Duchess.”