I’m pissed off. Have been all week.

Ever since I learned of the starkly sudden passing of Chris McDonnell, my emotions have pinballed between surpassing sorrow and pure anger. Anger that medical personnel sent a man with blood clots in his leg home, even if that might be routine procedure. Anger that his family had to watch him suddenly slip away from them. 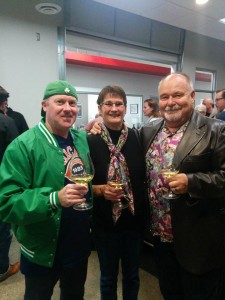 But mostly anger that this extraordinary man (on the left, with Lucy and John Hoffman), possessed of as positive and pure a soul as anyone I’ve ever encountered, was snatched away from us. The void, to his family and friends and work associates, hundreds if not thousands of people who could not help but love the guy, is immeasurable.

It always helps in the wake of death to talk with fellow grievers about our emotions, to share thoughts and feelings and sometimes the words of strangers. In times like these, we can provide one another with at least a small salve to the unbearable hurtness of being.

Reading the words of Bill Hooper and Jason Kallsen and Patty Douglas Campbell, talking with Jason and Jeff Nelson and countless folks who worked for rival companies and still deeply admired Chris, has helped. It has been a beautifully poignant reminder that so many of us blessed to be in the wine trade consider it a family.

The universal sentiment of the week: “I can’t believe I woke up this morning and realized again that yes, this actually happened.”

Amidst all this communicating and commiserating, someone passed along an amazing work by Tim Lawrence entitled “Everything Doesn’t Happen for a Reason.” It addresses the semi-rhetorical questions that those of us left behind inevitably ask. For people of faith, it’s often “How could God let this happen?” For the rest of us, it’s usually along the lines of “WTF?!?!??”

Lawrence’s sage advice: Don’t look for an explanation; just grieve and then just be. “Some things in life cannot be fixed. They can only be carried” is the gist of it. He eloquently (and yes, sometimes angrily) lays out how we should and shouldn’t deal with grief, and how not to talk to those in the throes of grief. 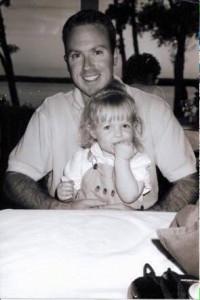 start with “Why?” Why are we here? My response: Who the hell is smart enough to know the answer, assuming there is one? Just be, and be good. As Chris, a font of goodness, did.

Absolutely we all should seek solace wherever we can and work through the stages of grief in our own ways. But I do hope that those suffering this week haven’t spent a ton of time trying to figure out “How could this happen?” That is yet another rhetorical question, utterly unanswerable.

Chris’ death has laid a big ol’ can of whup-ass on so many of us all week. But it always gives me some comfort to soak in this poem by Mary Elizabeth Frye: