What a week. Tasted nigh onto 500 wines, and most of them were good :o). I was judging at the San Francisco Chronicle competition, and yes it was work. (You try judging 43 domestic ports in one afternoon.) Some highlights:

• One of my panel’s weirdest categories was “de-alcoholized wines,” a first for my fellow panelists and myself. After trying and spitting the first one, a quite tasty Brut, I blurted out, “Wait a minute! We can swallow.”

• Kent Rosenblum was on hand, as always, and the Minnesota native shared some Ole & Lena jokes (too long to recount here, even if I could remember them) at a dinner. He prefaced the japes with this: “Did you know that the Swedes invented the toilet seat? But it was the Norwegians who put in the hole.”

• By the way, Kent is back consulting for the Rosenblum winery that he sold to Diageo almost a decade ago. (The wines need 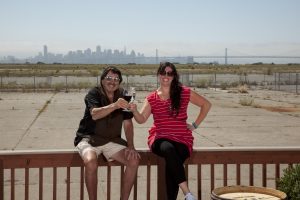 the help.) Also learned that Kent and his daughter Shonna, at their current winery Rock Wall, are making an “Ole & Lena” zin,

• Other stuff I gleaned: that the phrase “heart-warming” often is used as a euphemism for high alcohol; that I’m more OK with some brett than most judges; and that a good way to approach aromas in wine, from panel mate Greg Burns, is ” ‘I’m expecting this’ rather than ‘it tells me this.’ ” 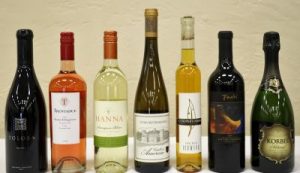