My relationship with DVDs has evolved over the years.

I used to buy a lot, to augment the freebies I got at work when I was reviewing them. But in recent years, as Netflix, On Demand, Redbox, Android Market et al. emerged — along with the semi-promise of being able to watch anything whenever we want at some point in the future  —  it seemed silly to pay more than around $10 for anything I was going to view only once, maybe twice. 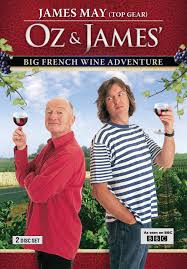 Thus my quandary with recommending “Oz & James’ Big French Wine Adventure,” an absolutely delightful account of two men’s wine-soaked journey through France. Anyone remotely interested in wine should watch it. You’ll learn a little and laugh a lot.

These are two engaging guys coming at wine from way-different angles. Clarke is a longtime wine writer and TV host in sodden ol’ England, while James May is a car nut and “Top Gear” host whose greatest fear is becoming a “wine ponce.” (Ponce = effeminate or ostentatious person).

Even toward the end of this series, James is insisting that “You drink wine and you drink beer so you can talk balls to your friends” (which actually sounds like a lot of vinous experiences, at least of the male-only variety). Or he’s defining certain wines as being desirable as “nipple erectors.”

Meanwhile, Oz is literally drinking blind at Chateau Beaucastel and getting James to kneel down and sniff cow pies so that he can better understand certain wines’ barnyard aromas.

They drink a lot, often in the tent they share, and for reasons that presumably go beyond 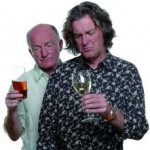 that, they develop mutual respect. In Episode 3, Oz admits that Jame has “moments of lucidity in the midst of his bombast” (which could be said of either of them). In one of those moments, James declares of Rhone vintner Michel Chapoutier: “What he says is fantastically convoluted, but it actually makes sense.”

My way better half and I enjoyed every minute, and almost had a couple of spit takes from the red beverage we were consuming while viewing.

Here’s the problem: Even with a recent markdown at Amazon, it still costs $25 — for a little less than 3 hours of viewing that you might come back to five years hence. And I can’t find it available for rental, at least with a cursory search.

So perhaps the best course, at least using the under-$10 rule is this: Find two friends who are sure to enjoy it, and split the cost of buying it. Maybe have the person who will end up keeping it pay a larger share.

It’s well worth the effort.