No, I’m not drinking bubbles from perhaps Champagne’s foremost producer (consarnit!). But within a half-hour just now, two Krug-related items crossed my transom.

First came an email from a Star Tribune reader regarding my Liquid Assets column that addressed, among other things, the matter of high-end wineries such as Silver Oak striving to reduce, if not eliminate, vintage variation. The reader wrote: 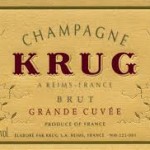 “My wife and I recently returned from Reims and had the good fortune to have a personal tour of Krug. During the tour, we learned that Krug’s driving passion has always been that its Grande Cuvee Champagne ‘always have exactly the same taste.’ The idea is that people who love it should be able to expect exactly the same taste every time they buy it.

“As you can imagine, given the variation in grapes from year to year, this means they do not follow a strict formula as to what percentage of grapes from various year and vineyards go into that year’s Grande Cuvee. Rather, there is extensive tasting that goes on to find that year’s mix of grapes that will yield the famed ‘Grande Cuvee taste.’ We learned that, for years, the two Krug brothers pretty much themselves were in charge of such tastings. Now, it’s a team of ‘taster experts’ who must come to agreement.

“We were really impressed by this commitment and it is nice to be able to get the special taste one desires””especially if one is spending a fortune to get something like Krug.”

Fascinating stuff, and not at all surprising.

Shortly thereafter, via a Tweet from the indefatigable blogger Alder Yarrow with a link to a Wine 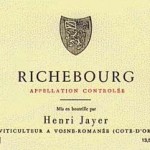 Searcher list of the world’s most expensive wines. I was much less surprised that three Krug bottlings made the list than by the price of the spendiest bottle: $14,395 for Henry Jayer Richebourg Grand Cru.

I would be seriously daunted by sampling that wine. Not that I wouldn’t.

What I actually would not do is handle the bottle while it had even a drop left in it.