Daryl Groom seems almost too good to be true.

Never mind the winemaking, the otherworldly Penfolds Grange Hermitages he crafted, the stratospheric improvement in Geyser Peak’s wines during his time there, the stellar Groom Wines he is crafting Down Under. Never mind his being named winemaker of the year by the Quarterly Review of Wines, San Francisco Chronicle et al.

No, it’s his personality, outsized but accessible, warm and welcoming, that almost strain credulity. Spending time with Groom is a little like seeing George Clooney effortlessly charm and disarm an audience and wondering “Can he really be that nice?” In Groom’s case, yes, by all accounts. And his prime focus right now says a lot about his good-hearted nature: Since his son Daryl underwent two heart surgeries, he and Daryl have collaborated on the tasty blend Colby Red, and are nearing their goal of having $250,000 of the sales proceeds go to heart-related charities (2011’s donations are here.)

Meanwhile, Colby himself “is doing awesome,” his dad said. “His health is great, and he is growing like crazy. You would not know this is the same young man that we saw in a very fragile, frail state only five years ago when he underwent his back-to-back open-heart surgeries.

“As parents we have particularly loved watching how much the Colby Red Wine project has helped Colby mature and grow in confidence. Colby attends many charity heart functions across the USA, where he gets on stage in front of up to 1,000 people and now competently tells his story. His opening line is ‘I am happy to be here and I don’t just mean here on stage I mean alive.’ “

The project started small “” “we set out to make two barrels of wine and maybe raise $500 for charity” “” but then a national distribution deal with Walgreen’s and a “The Today Show” feature on the Grooms’ efforts sent production of the red blend skyrocketing.

Aussie winery running smoothly. Marschall Groom Cellars focuses on just three varietals (sauvignon blanc, shiraz and zinfandel). Perhaps more importantly, “We grow all of our own fruit and we have owned our vineyards, which we planted and have managed ourselves, for 15 years. 

David Marschall, Groom’s brother-in-law, is vineyard manager, and “my great winemaker friend Natasha Mooney, who made the much sought after E&E Black pepper wines, carefully looks after my wines in tank and barrel when I can’t be there,” Groom said.

Not surprisingly, the ebullient Groom expects the Australian wine industry to “be rediscovered by the trade and the consumer. I think the rebound will come with wines in the plus-$15 category rather than the mass-appeal wines the consumer used to know well. In this price category the consumer will discover some great artisan winemakers, rather than cookie-cutter wines. Wines at this price also start to offer regional identities.

“Australian winemakers are also moving past the [Robert] Parker big-alcohol, jammy type wines and going back to what they do best and what tastes best: balanced wines offering great fruit and complexity. Australians are battlers by nature and will always find a way to come out on top.  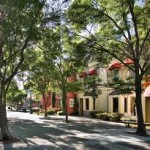 But residence-wise, Grooms is now solidly entrenched in California. And it goes beyond the well-duh rationale of being able to live in a place like Healdsburg (left). He was senior red winemaker at Penfolds in 1989 when his bosses purchased a half-interest in Geyser Peak and asked him to spend a few years resuscitating the winery, promising him his old job back if he decided to return. I’ll let him pick up the story.

“In July of 1989, with a 1-year-old daughter and my wife 7 months pregnant with our second, we headed off to do my second harvest of that year. “My first daughter was born in the middle of the 1988 harvest in Australia and my wife said never again would she have a baby in the middle of harvest. So our 2nd child was due in September, arriving right in the middle of my first Californian harvest.

“If you recall the 1989 harvest is often referred to by Californian winemakers as the “˜harvest from hell’ because of the very wet weather. Halfway through I had wondered if I had made the right choice and wondered if all harvests were like this in California. In 1992, due to Penfolds’ parent company going bankrupt, Geyser Peak was sold back to the other 50-percent owners, the Trione family.

“I had my bags packed ready to return to my previous winemaking job at Penfolds. It was January 2004, and I had just flown back into the USA after being in Australia to make arrangements to return. At the airport I picked up a copy of the L.A. Times and saw that Dan Berger had just named me Winemaker of the Year.

“At that point Henry Trione asked if I would consider resigning from Penfolds and staying on with them. Knowing that my best wines were still in barrel and with Dan’s endorsement, I simply found I could not leave my new wines. Plus we loved living in

Sonoma County. I am still living the dream in beautiful Healdsburg, California. 

As a result of that decision, some great juice with Groom’s imprimatur is being produced on both sides of the Pacific. And on the domestic side, it’s for a seriously cool cause.