If the perpetual gleam in his eye and well-earned smile lines weren’t enough, what comes out of John Skupny’s mouth makes it clear that this man enjoys life.

“We like to say that it takes a lot of beer to make good wine. 

“I was crushing with [cult winery] Kongsgaard and brought in a packet of yeast, and you would have thought that I was Nosferatu.  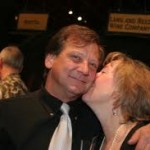 And while the ever-grinning Skupny (at left with wife Tracey) is on no danger of taking himself too seriously, he has forged his own path by taking viticulture and viniculture quite seriously. To a point. “The science [of winemaking] is really, really important,” he said over lunch at the wonderful new-ish restaurant Farmstead in St. Helena. “Fortunately, I can hire that out. 

Basically, Skupny has taken what he knows and likes, learned what he could and filled in the rest in building Lang & Reed into a reliable producer of beautifully crafted, seriously tasty cabernet franc.

He is, best I can tell, the only Napa vintner who makes nothing but cab franc, still a more popular grape in France than on these shores.

“Tracey [his partner in life and business] and I had been in the restaurant business in Kansas City in the mid-1970s, and back then the wine business was Euro-focused,” he said. “But when I got to the coast, the Rhone and Loire weren’t so popular.

“To me cabernet franc is as charming as gamay can be, but not as simple as gamay is. 

He brought that Europhilia to Wine Country ““ while working at Caymus in 1984 “I made the picking target for cabernet sauvignon 23 brix [well below the ripeness level of mostNapacabs]. I am a bit of an old fuddy duddy” ““ and never lost his ardor for cab franc, which, he says, even “makes cabernet sauvignon taste more like it should.” He also picked up a mentor while working at Coppola: the esteemed winemaker Tony Soter (left). “Tony taught me that the question was more important than the answer,” he said. “So I think it through on the question. 

At a certain point, with one answer in hand (he wanted to start a winery), the question became whether Skupny would follow the standard Napa cabernet path, with sauvignon rather than franc.

More than economics played into the question at hand. There was the matter of Skupny’s love of quality food, in a country that was just starting to share that love. “A lot of people say cab franc is the ultimate food wine because by its nature it has a green edge, a herbaceousness,” he said. “You want fresh herbs, dry herbs. No asparagus. 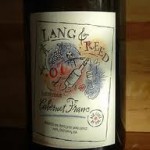 The Skupnys and Jeff Morgan launched the winery, bought 1½ tons of cab franc grapes from Oakville’s Stanton Vineyard in 1993, bottled it in 1995 and didn’t sell it till 1997.

“With four years of age, it’s easy and delightful but not simple,” he said. “The tannin levels are low, but the acidity holds up. So it’s balanced from the get-go, with softer tannins and more finesse. 

Amen that. I’ve never had a Lang & Reed wine that wasn’t balanced and earthy, evoking the soil from which it sprang. The 2007 North Coast is rustic but lush, with just enough grip. The 2005 Premier Etage is somehow richer and earthier, and lingers for what seems like days.

Those would be happy days. No wonder John Skupny’s smile muscles are so well-worn.