One of the reasons I love Facebook is because friends steer me to fascinating stories like this one, headlined “It is now clear that the hippies won the culture war.” 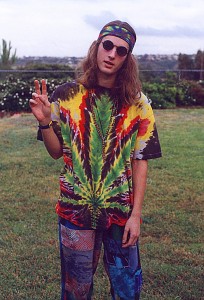 The piece is incomplete — there’s no mention of the burgeoning popularity of hippie staples like yoga, massage therapy or meditation — but the gist of it is spot-on: “Although the counterculture disappeared, it produced a cultural revolution over the long term.”

It occurs me that, along with natural foods, gay rights and the ongoing decriminalization of marijuana, the cultural effects have included something else: the ascension and democratization of wine.

I came of age in that era — not sure if I could ever be said to have “grown up” — and in recent decades had been disappointed that more aspects of the counterculture had not made their mark. But there’s absolutely no question that wine has.

Back in the day, we latched on to sweet pink wines from Mateus and Lancer’s, even keeping the bottles as

candle holders for what we hoped would be a seductive setting with a newly opened bottle. Granted, we glommed on to most any distilled or fermented beverages we could find. But more than the Beat Generation or any alternative-seeking young folks before them, we liked our wine.

And our generation, the Baby Boomers, has been unquestionably at the forefront of wine’s burgeoning popularity over the past three decades, to the point where Americans now consume more wine than any other nation’s inhabitants.

Not only did we recognize the romance of wine, we also savored the communal nature of it. I’ve oft compared wine to weed in that regard, as something to be shared — and contrasted it with cocaine and

liquor, which tend to be solitary pursuits. Just as we passed around Boone’s Farm Strawberry Hill four decades ago, now we love to bestow our favorite bottles with friends in a group setting. Share and share alike, as we “mellow out.”

We’re the same way with less prestigious wines, continuing to experiment as the wine world has flattened, bringing us juice from throughout the globe and creating a competitive market that provides gobs of affordable options. All right and outta sight!

Granted, some boomers hoard and home in only on spendy trophy wines (that’s the “cocaine crowd,” I say :o) ). But I’ve heard from many merchants that Boomers by and large are just as adventurous as younger generations. Once a free spirit …

And now we even have a category/movement that harkens back to the day: “natural wines.”