Max Potter’s “Shadows in the Vineyard,” which I reviewed last week, is filled with interesting fodder on two subjects I love: history and french wine. A few things I learned while reading it (direct quotes from the book have quotation marks):

• In the 1st century BC, Romans planted vines in Pagus Arebrignus, now Burgundy. Virgil and Pliny the Elder waxed effusively about the wines, but it was a farmer in the 1st century AD, Columella, who probably recognized that pinot noir was magical in certain pockets of the area. He also “flirted with the notion of terroir when he wrote, ‘The vine planted in fat silt yields abundant wine, but inferior in quality.’ ” 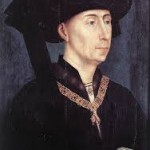 • ”In 1395, the Duke of Burgundy, Philippe the Bold (left), banned the growing of Gamay because this varietal of ‘horrible harshness,’ as he put it, was being planted in soil that could be used for tasty and more taxable Pinot Noir.”

• For centuries, Burgundy’s negotiants were notorious for blending their best stuff with mediocre or poor wines.  But they didn’t stop there: “… these agents went so far as to produce utterly fake wine, vins atificiels, in the form of flavored sugar water, which contained no fruit at all. They would sell that as a burgundy or if they found themselves short of more exquisite Pinot, they’d cut what they had with vins artificiels.”

• “Technically no French word exists for ‘winemaker,’ because the French philosophy is that man does not make wine, God does. Vignerons merely tend, harvest, press and vinfiy what he has provided.”

• During World War II the de Villaine family’s partner decided to sell his half of DRC. The Drouhins were offered that half, but 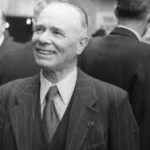 Maurice Drouhin (left) was in a German POW camp and wrote to his wife that the war made it too risky to go into debt for the property. Ultimately Henri Leroy joined with the de Villaines to form a societe’ civile (corporation).

• “The dominant method of populating the vineyard [in mid-century France] was a viticultural technique called provignage: An aging vine that historically had been reliably robust would be pulled down, buried under the soil, such that its shoots would push through the earth and grow into new vines.” 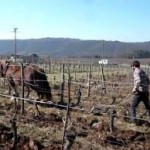 • More terminology: Decavaillonage (left) is “the springtime chore of churning up and opening the soil around the base of the vinestocks to maximize the flow of air and water to the roots.” Buttage is the autumnal task of “earthing up” the soil to protect vines from cold and frost

• The Franciscan missionaries first brought grapes to California, which is how the Spanish criolla grape became known as the “mission” grape.

• In the mid-19th century, the mission grapes were producing blah wine for a former Bordeaux farmer named Étienne Theé. But countrymate Charles 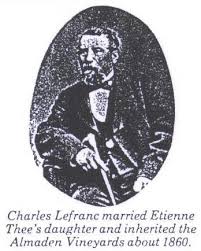 Lefranc (left) showed up in the Los Gatos area and quickly became enamored with Theé’s daughter. They conspired to bring in cuttings of four grapes — cab sauv, pinot noir, sauv blanc and semillon — from Bordeaux and grafted them onto mission rootstock, “the first high-quality French vines ever planted in Northern California.” The new partners built an adobe winery and christened it New Almaden, after a nearby quicksilver mine.

• In 1878, a Frenchman named Paul Masson moved to the area, partly because of a phylloxera outbreak in his native Burgundy. He married Lefranc’s daughter (sensing a pattern here?) and took over the New Almaden winery after Lefranc’s death in 1887. He grew the winery up until Prohibition, which he survived by growing grapes for “medicinal” wines.

• When the case at the book’s core was about to go to trial, Comte de Vogue’ chef de cave Francois Millet called for harsh penalties with this rationale: “Burgundy is a place that has been and must be free if such evil so that man can focus on the poetry of nature that God has given us, and we can focus on our responsibility to honor that.” 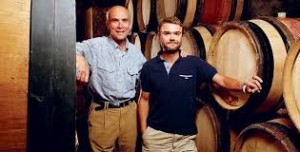 • But wait, there’s more. Aubert de Villaine’s nephew, Pierre de Benoist (at left, with de Villaine), offers up this view: “People say that wine is grapes in a glass, but I have a different view. The grapes are gone. They are no more. What’s left are the juices, the souls of the grapes, the ghosts of the grapes. These souls, these ghosts, that is what we drink; their spirit infuses our own.”