Some notes, quotes and anecdotes from the week leading up to and including the Premiere Napa barrel tasting.

• Barnett Vineyards makes wonderful wine atop Spring Mountain, and one of its choicest vineyards is

called Rattlesnake Hill, apparently with good reason. I asked proprietor Fiona Barnett if there still were rattlers up there, and she smiled and said “we killed about 10 of ’em last year.” Add that to the list of winery jobs I will not not seeking.

• The rain amounts people in Napa got from the mid-February downfalls varied wildly. In the valley, most folks said they received 5 to 6 inches. Atop Spring Mountain, Charlie Smith of Smith-Madrone said they got about 16 inches. Those hilltops generally do get more precipitation, but their steep vineyards drain so well that there is no problem with standing water. By the way, Smith-Madrone’s 2012 riesling is about as good as any domestic version of this fabulous grape as I have encountered. 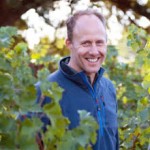 — and wisely escaped. He now owns The Grade Cellars in Calistoga and was even wiser to hire Thomas Rivers Brown (right) as his winemaker. I asked Tom a question that I ask all winery owners: Are you in the room when the final blends are made? “Yes,” he said, “but I don’t know what happens after I leave the room.”

• I ran into blogger W. Blake Gray and we discussed, among other things, the cutbacks in food coverage at his former newspaper, the San Francisco Chronicle. I lamented that editors who are focused on coverage that’s “local local local” don’t seem to grasp the fact that food is as “local” as it gets because it’s in everybody’s home, and the same goes for wine, although in fewer households but still a significant number. Blake wondered when these powers-that-be will recognize that “all people want to read about is food and sports.”