I love wine (duh!), and I’m generally quite fond of others who love wine. But I have a hard time understanding “” and have given up trying, lest my head explode “” those who have a narrow view of what good wine is.

So I have little time for those who will drink only “natural wine,” even though it’s kinda fun to ask them to define it, or only European wines, or only big-ass Napa cabernets. Part of what makes wine so fabulous is the amazing range of flavors and textures that can be wrought by fermenting grape juice.

I have a friend whom everyone knows as “Burgundy Bob,” although he confides that sometimes he’s really “Barolo Bob.” But as much as he adores those leaner, quintessentially European reds, he also holds an annual “Zinfandel Night” that is always great good fun. 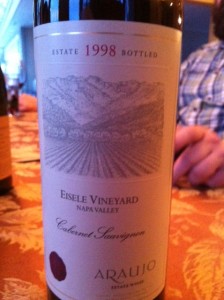 Now I’m wishing we had invited Bob to a gathering last weekend, where the theme was zins and something else, preferably unusual or distinctive. The latter adjective certainly applied to the 1998 Araujo Eisele Vineyard Cabernet that my friend Cass (who always steps up to the plate mightily at these events) brought, along with a 1998 Martinelli Jackass Hill Zinfandel.

Those two wines proved how refined a powerhouse red from California can be. The cab also provided further evidence that the maligned 1998 vintage is aging waaaaaay better than the ballyhooed ’97s are, although as Cass noted, “the people who knew what they were doing made ’97s that have aged well.” The Martinelli was also sublime, voluptuous but undergirded with minerally goodness.

At the other end of the spectrum were a couple of lean, beautifully defined entries, including a focused, harmonious 1998 Noel Verset Cornas that my friend Mitch brought. For some, the wine of the night also had a European bent but hailed from California: a 2011 Arnot-Roberts Luchsinger Vineyard Clear Lake Trousseau. 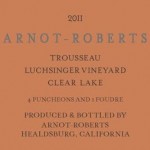 This light red was beautiful at the pre-zin beginning of the night and fairly profound at the post-zin end. Color-and texture-wise, it could have passed for a rosé, and the herb-kissed red fruit, beautiful florals and spot-on acidity made for a near-perfect package. The estimable Eric Asimov took a look at the ongoing emergence in California of this grape, found mostly in France’s Jura district, last fall. I can’t wait to buy and try a lot more, from here and across the pond.

During the course of the evening we had some fabulous zins from Carlisle, Turley, Lagier-Meredith and others, plus my first-ever chili with mushrooms in it (thanks, Mark!). Even within the zins, there was a wide array of intensity and subtlety, freshness and rusticity.

Despite a rather limited range of varietals, the night included most everything red wine has to offer “” for a crew of cork dorks who knew how to appreciate that breadth. My peops.