It’s really great to listen to winemakers speak lyrically, metaphorically or even metaphysically, about how grapes are grown and then transformed into a delicious liquid. It’s also pretty swell, and refreshing, to hear someone like Adam LaZarre, who has made hugely successful wines at rock-bottom prices, cut to the chase.

Like this: “People ask me if winemaking is art or science,” he said over dinner at McPhee’s Grill in Templeton, Calif. “It’s business, damnit.” Or this: “I’d rather have 3,000 people having my wine tonight than three people having it every three months.” Or this: “I put a lot of distributors’ kids through college with Rex Goliath. I have a lot of equity.  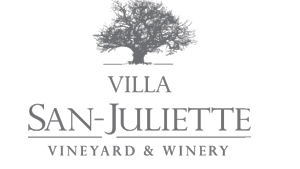 LaZarre, who made wines that performed way above their price points with the Rex Goliath, Cycles Gladiator, Hahn and Bin 36 brands, would seem to have achieved pretty good job security. He’s making wine for a couple of entities with what he calls “really good day jobs”: Nigel Lythgoe and Ken Warwick, who started the British show that spawned “American Idol” and produce a raft of other reality shows, own Villa San-Julliette, and Hearst Ranch is a subsidiary of the Hearst media and castle conglomerate.

“I do all the marketing, and Jaime [Glenn] is the sales manager” at Villa San-Juliette, LaZarre had said earlier in the day as we sampled recently bottled stuff at the winery. Only someone with his otherworldly energy level could do both these jobs. 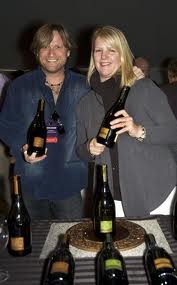 LaZarre (left, with Glenn) seems to know every grower from Sonoma to San Diego and is sourcing grapes from all over for San-Juliette (priced like Hahn at $16-$24) and its second label, Fat Monk (priced like Cycles Gladiator at $13 and under).

Fat Monk’s chardonnay and pinot noir are smooth and fruit-driven, with nifty mouthfeel and some nice oomph at the end. The Villa San Juliette Paso Robles Cabernet offer great complexity for the price ($16), while the similarly priced merlot elicited some Tootsie Pop analogies before smoky tannins kicked in to provide nice harmony. His LaZarre Pinot Noir ($28) is firm, clean and spicy. Oh, and delicious.

“Being a great pinot noir maker” was LaZarre’s dream when he got out of the U.S. Navy more than two decades ago, “but that’s not gonna happen.  Not surprisingly, he has some views on pinot and some other red grapes:

• “I’m convinced that someday pinot noir will be cheap again. 

• “There actually are far fewer places to grow merlot than pinot noir in California. If it’s one ‘degree day’ too low, you get bell pepper; if it’s one day too high, you get Jolly Roger candy. 

LaZarre, meanwhile, is one of the few California vintners who can make tasty wine out of all three grapes ““ and continue to put a lot of distributors’ kids through college.