A wacky (and tasty) new grape, an exhausting slog through 30 syrahs, some fabulous cheap-food metaphors from a fellow judge and a whole lotta camaraderie were among the highlights of last weekend’s San Francisco International Wine Competition.

It was the 34th year for the event but the first for me as a judge, and it was a blast. But it’s more work, 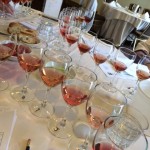 and more exhausting, than most any outsider would imagine. It’s not just working through 135 wines in a day, but having to really focus on each one, that wears a body and brain (and especially a palate) out.

Blessedly, I was on a panel that included Traci Dutton, a font of wisdom and pithy comments and the director of public wine studies at the Culinary Institute of America (the real CIA, or so they say). Heading our panel was Michael Feil, GM/Wine and Spirits Buyer for the Jupiter Island (Fla.) Club and a hail fellow well met.

Among the noteworthy happenings, we encountered no corked wines among the 230 or so that our panel tasted, a remarkable turn of events even if a lot of them doubtlessly were under screwcap. We had a stupendous flight of mourvedres. We also had fun blending two rieslings that had been vying for best of show — and created an even tastier wine in the process.

In the sweepstakes on Sunday, a wine made from a grape called Irsai Olivér  generated a lot of buzz and more than a few votes for best white in the competition. Alas, the wine is from the Czech Republic and not yet available on these shores. (This was an international competition, after all).

But for this judge, many of the best moments came when Traci (and occasionally Michael) commented on the wines. 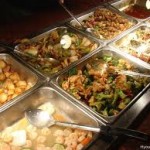 After we all agreed that there should be a Meyer Lemon Pledge, the analogies came a-callin’. A chardonnay “smells like Chanel No. 5; it has to get a gold.” A viognier evoked “a bad buffet at an Asian restaurant,” and a tempranillo was “like a cheap pizzeria’s red pepper flakes.”

One cabernet smelled like “Gerald Asher’s smoking jacket,” another “like walking into a real good spa, with eucalyptus and all those aromas.” One zin “smells like hair permanent,” and another “smells and tastes like kielbasa. It must be a Polish zin. It does make for a natural food pairing.”

One merlot was “like a big, dumb dog”; a malbec was so inky “you could dye your T-shirt with it.” A fruit wine’s nose was “gruyere vs.Parmiggiano-Reggiano.” And our near-endless array of seriously grippy warm-weather syrahs was dubbed “the Goth flight.”

On top of all these bon mots (and mal mots), Traci also displayed her ability to hold six wine glasses in one hand. Fabulous stuff. 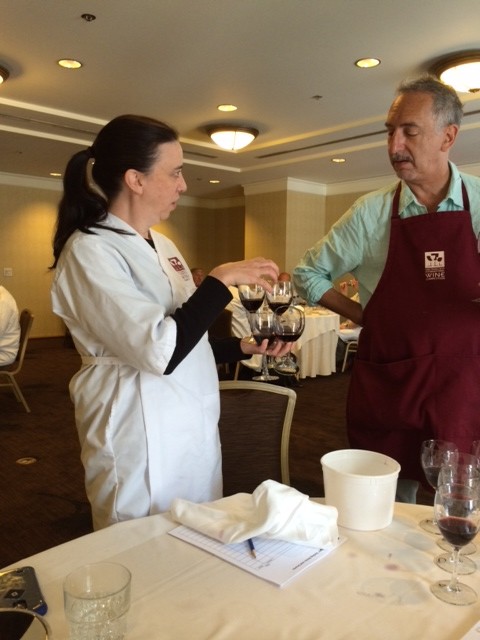