I thoroughly enjoyed yacking with winemaker Stephen Ross Dooley last month, and when I went to write about him in my day job, the constrictions of print media meant leaving some stuff out.

A few more thoughts from the Minnesota native turned Central Coast vintner (pictured below with his clan):

• Sites in the Santa Maria/Edna Valley area: “We now have a pretty good handle on what should be grown here. The first grapes were planted here by the Spanish mission in 1772. 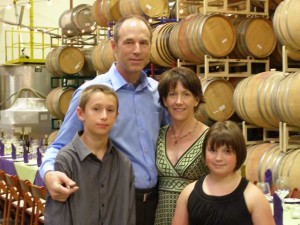 In 1973 we had the first commercial grapes. We tried everything. Syrah and grenache do pretty well in a lot of spots. Winemakers also now have a pretty good idea of what clones they want. And we understand a lot more about row direction and density.”

• The climate there: “We pick earlier these days, a little bit with the chardonnay. With pinots, we want 13.5, 13.8 [alcohol] tops. Because of the cool air we do have a lot of acid, so if we pick too early the wines are too acidic. The average daytime high in the summer is 74. If you go downtown to the farmers’ market [in San Luis Obispo] on Thursday night, you’re gonna want to wear a jacket.”

• Trying wine while growing up: “My mom taught at Mankato State. Sometimes we’d go to another faculty member’s house, and there would usually be an Italian red that I wouldn’t like.”

• Farming in his background: “My mother grew up on a dairy farm in Michigan, and we spent a lot of summers out there. I loved being on the farm. I was a little guy, and those cows were huge.”

• “Farming” now, as recreation: “I still garden, mostly to relax, not for idea inspiration. I get more of those in the shower. 

• On how much he likes making and drinking chardonnay: “It gives me a chance to play, and with just 100 cases I don’t have to sell a lot out of state ““ and we like to drink ’em ourselves. We’ll be getting low and I’ll say “˜Wait, I want a case.’ “