So my dad died last week, and it got me to thinking about how he and my late mom might have helped me on my path to wine.

They were both heavy drinkers. Legal drugs (alcohol, cigarettes and a raft of prescriptions) ruined my mother’s health and absolutely shortened her life (she died at age 66). And while Dad made it to 84, his doctor said the dementia that eventually killed him was fueled or hastened by his alcohol consumption.

So I almost certainly was destined to, as my daughter-in-law deftly frames it, “like the drink.” But I did not remotely want to go down the boozy road my parents were traveling (vodka for her, Scotch for him), although I do rather enjoy the occasional glass of sour mash. So in that sense, they steered me toward wine. 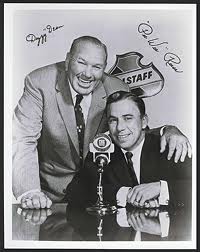 My dad traveled to Germany on business in the early ’60s and fell in love with a beer called Löwenbräu. He would give me an occasional sip at age 8 or 10 when we were watching a ballgame with the inimitable Dizzy Dean and Pee Wee Reese at the mike. In the process I picked up, at least subconsciously, one of my core beliefs: that there’s nothing wrong with sporadically giving a small amount of beer or wine to kids. I was never destined to be puritanical, to be sure.

During Dad’s European travels, or maybe on business trips domestically, he developed a fondness for the red wines of Burgundy. In the last few decades, he has ribbed me mercilessly for the way my fellow miscreant teenagers and I raided his “cellar” and quaffed his Gevrey-Chambertin. I have no recollection of this but have no basis to deny it (although it’s a bummer to not be able to recall any “ah, so this is wine” moments). So maybe I have Dad to thank for being an ardent Burg hound.

I certainly owe him for helping me learn how to shop for red Burgs. Or more precisely, how not to. Even though Dad’s Burgundy collecting ended decades ago, I decided during the ’90s and early ’00s that in the interest of irony/makeup/whatever, I would include in his Christmas gifts a red Burg, preferably a Gevrey-Chambertin.

Bad idea, at least the way I went about it, which was to go grab one off the shelves at Haskell’s. Nary a one had any character, which figures because I knew nothing about Burg shopping, and even for those who do, it was justly renowned as a crapshoot in that era. So I took two courses of action:

• I started studying Burgundy, mostly via acquaintances, and figured out that the vintner’s name in the teeny-tiny print on the bottom of the label was way more important than the 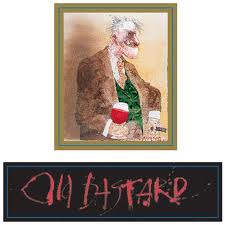 • I kept on buying high-end wine for Dad for Xmas, but switched to Old Bastard. As his dementia started kicking in, I had to remind him that it was the real deal, not an everyday wine and certainly not a joke wine.

But most of all, I have Dad to thanks for my hedonism, my lust for life. He spent the first 20 years of his adulthood piling up accomplishments, then decided that it was more important to enjoy life than to spend it doing what others expect of you. My way better half and others have called him Hemingway-esque, as much for his gusto and buoyant personality as the big-game hunting. I’m not about to argue that notion.

And I couldn’t possibly thank him enough for setting that Bacchanalian example.